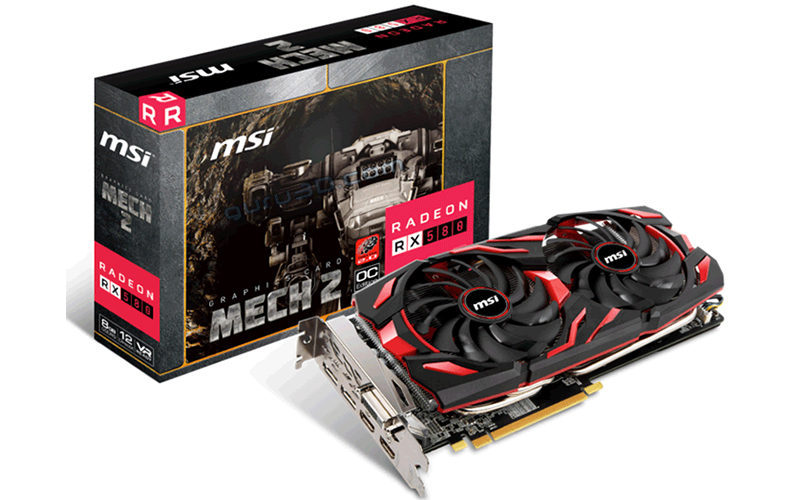 AMD is getting another exclusive brand for its Polaris-based graphics cards, despite the abrupt cancellation of NVIDIA’s GeForce Partner Program. MSI has announced the Radeon RX MECH 2 series of graphics cards dedicated to AMD’s Polaris GPUs, and they will feature a new thermal design with MSI’s Torx 2.0 fans.

Unlike ASUS’ AMD-based AREZ cards which were basically rebranded ROG GPUs, MSI’s MECH 2 series actually brings something new to the table and is not merely a name change of an existing card.

A large heatsink connects to 6mm copper heat pipes, while a nickel-plated copper baseplate makes contact with the GPU die and channels heat away from it.

The cooling shroud itself is a familiar mix of red and black, and the cards also feature a matte metal backplate and red accent lighting. An RGB LED illuminated logo of the MSI dragon sits at the top of the card and can be customized to match the rest of your rig.

As of now, there are just two MECH 2 cards – the Radeon RX 570 and 580 – but it makes sense to assume that more cards will be added in the future.

It’s interesting that we’re still hearing news of exclusive AMD-based product lines even after the demise of NVIDIA’s GPP, but it may be that MSI was too far along in its rebranding plans to change course.

MSI didn’t release detailed specifications or pricing for its MECH 2 series, but the cards are expected to hit shelves by the end of July.