MSI announces the all-black X99A SLI, brings carbon fiber to AMD AM3+ board

MSI announces the all-black X99A SLI, brings carbon fiber to AMD AM3+ board 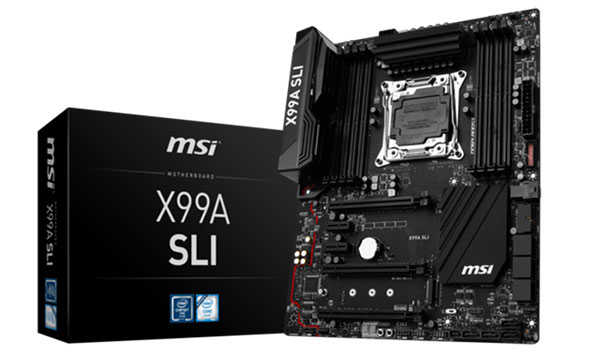 The X99A SLI is the newest addition to MSI’s stable of Intel X99 motherboards, and it retains the all-black color scheme of the X99A SLI Plus. However, there are certain design changes, and it now features an I/O cover to protect the assorted connectors and devices from electromagnetic interference. The CPU socket itself also has a silver finish, versus the entirely black socket on the X99A SLI Plus.

The new board also comes with a USB 3.1 Gen 2 Type-C port on the rear I/O panel, something that was missing from the SLI Plus board.

Other features include newer Military Class 5 components with titanium chokes, a dedicated U.2 port, and support for up to 3-way SLI and CrossFire.

Then there’s the MSI 970A Gaming Pro Carbon, which is the first MSI motherboard based on an AMD chipset to feature its signature carbon fiber finish. MSI says it built the board from the ground up around the new design, and it boasts things like Mystic Light RGB lighting that can be synchronized with a compatible MSI graphics card. The board is actually an AM3+ socket board, so it will not support AMD’s upcoming Zen processors despite being released relatively close to Zen’s supposed launch. And because it is based on the AMD 970 chipset, it doesn’t actually support PCIe 3.0 and you’ll get just two PCIe 2.0 x16 slots, three PCIe 2.0 x1, and one PCI slot.

Both x16 slots have been shored up with metal reinforcements to withstand the weight of heavier graphics cards.

Join HWZ's Telegram channel here and catch all the latest tech news!
Our articles may contain affiliate links. If you buy through these links, we may earn a small commission.
Previous Story
Huawei’s new Honor 8 comes with P9’s dual-rear camera setup
Next Story
New iPhones could have up to 256GB of storage