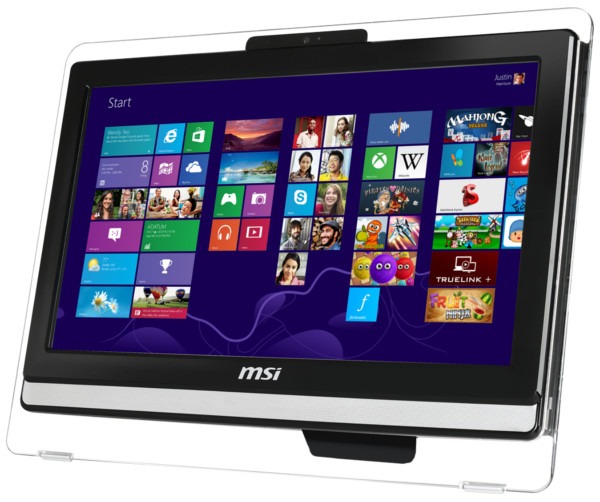 Sporting a transparent bezel, the compact AE200 is the first to feature the E2-3000 APU of AMD's Kabini platform. Based on a 28nm producing process, the new APU delivers high performance with a low power consumption of just 15W. AMD Kabini does more than just integrate the GPU and CPU into the same chip; the chipset functions are also integrated to create the industry's first System-on-Chip (SOC) APU processor. The MSI AE200 now features the E2-3000 integrated with AMD Radeon HD 8280 graphics for a boost in multimedia and 3D performance compared to previous generations.

Users can protect their eyes with the AIO PC incorporating the "Flicker-Free" and Less Blue Light technologies into its Anti-Glare display. The COM Port supports a variety of different commercial applications, including barcode scanners, credit card readers and so on. The MSI AE200 also comes with a range of I/O options which includes a USB 3.0 port and the power-off charging technology.

Join HWZ's Telegram channel here and catch all the latest tech news!
Our articles may contain affiliate links. If you buy through these links, we may earn a small commission.
Previous Story
SingTel Releases Preliminary Findings on Cause of Fire at the Bukit Panjang Exchange
Next Story
MobileIron for Android Allows BlackBerry Customers to Migrate Securely