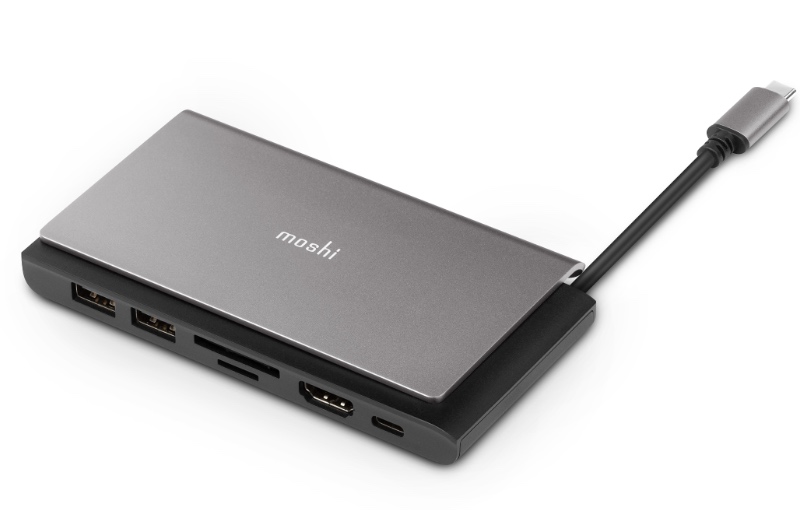 The thing that annoys me most about USB-C hubs is the trailing cable that connects to your system.

Hyper’s HyperDrive 9-in-1 USB-C hub has it and so does Belkin’s USB-C Multimedia Hub.

It annoys me because it makes the hub difficult to put away in your bag. There’s always a tail sticking out and you have to stuff away.

Moshi’s Symbus Mini, however, doesn’t have this problem. That’s because the designers at Moshi have thoughtfully integrated a shroud into the hub that includes magnets to hold the connecting cable away.

Though it makes the Symbus Mini a bit larger than its rivals, the shroud, which Moshi calls the SnapTo cable management system, is a clever and thoughtful piece of design.

The hub itself provides two USB-A USB 3.1 Gen 1 ports, SD and microSD card slots, a Gigabit Ethernet port, and an HDMI 2.0 port that supports 4K resolution at up to 60Hz. The Symbus Mini also has a USB-C PD port that supports up to 70W of pass-through power. That’s sufficient to power most ultraportable-class notebooks.

Though the Symbus Mini doesn’t have the most ports, it’s worth mentioning that an HDMI 2.0 port is a pretty rare feature in a portable USB-C hub. The abovementioned Hyper and Belkin hubs both have HDMI ports but they only support 4K resolution at up to 30Hz.

At S$150, the Moshi Symbus Mini is one pricey USB-C hub. However, it has a sleek and thoughtful design and it’s one of the few portable USB-C hubs to feature an HDMI 2.0 port. It’s also backed by a strong 10-year long global warranty.

You can find the Moshi Symbus Mini USB-C hub on Lazada from the Moshi store.

Join HWZ's Telegram channel here and catch all the latest tech news!
Our articles may contain affiliate links. If you buy through these links, we may earn a small commission.
Previous Story
Samsung readies One UI 4 and Android 12 beta for Korean users
Next Story
Apple Watch Series 7 may be delayed due to production issues