Compal, an original design manufacturer (ODM) in Taiwan with an annual revenue of roughly US$28 billion, has entered a license agreement with Microsoft with regards to the Google Android platform.

The agreement is marked as the tenth license agreement providing coverage under Microsoft's patent portfolio for Android smartphones and tablets. While there is no mention of which patent portfolio has been covered in the agreement, earlier reports have brought up examples such as patents related to “implementing both long and short file names in the same file system,” a monitoring system that determines when to erase memory from flash memory devices, and patents related to managing contact databases and meeting requests.

More importantly, the announcement also means that companies accounting for more than 50% of all Android devices in the market are now in a patent license agreement with Microsoft, some of which includes big players such as HTC and Samsung.

HTC is reportedly paying Microsoft US$5 for every Android device it produces, while Samsung is paying royalties to Microsoft, on top of an agreement to cooperate in the development and marketing of Microsoft's Windows Phone OS. In the United States alone, the recent agreement with Samsung brings 53% of all Android smartphones under the licensing agreement. 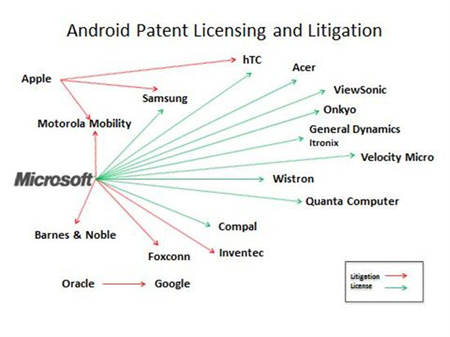 While Microsoft is seemingly gaining a lot out of the licensing revenues, the company has also stated that it has spent roughly US$4.5 billion to license in patents from other companies over the last ten years, with over 1,133 agreements over the last decade to license their patents to other companies. The company has also initiated lawsuits against companies that haven't agreed to pay up, such as Motorola Mobility which is currently in the process of being acquired by Google for US$12.5 billion.

While the late Steve Jobs said that he was willing to declare thermonuclear war on the Android platform, the real threat might come from Microsoft. With the additional cost from the licensing agreements, companies are starting to face the heat and have to second guess how financially viable the Android platform will be in the near future.

Previous Story
Google Contemplates Buying Yahoo?
Next Story
One in Five Women Would Rather Give Up Sex than Facebook