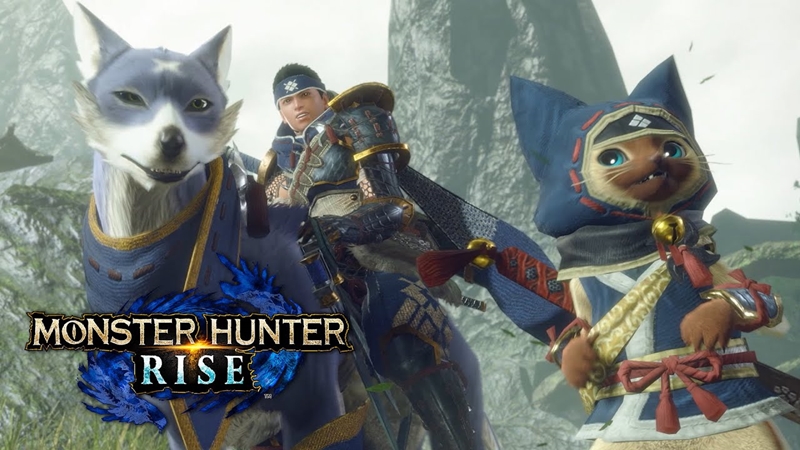 For those who didn't get yesterday's memo, Capcom has just concluded the livestream for the Monster Hunter Rise Digital Event. Among the bevy of new information they revealed on stream, the three main bits that we'll be going over here are probably the demo announcement, Wyvern Riding, and some of the new monsters and locales Rise has to offer when it releases on March 26.

First up on the discussion menu are the new Frost Islands and their inhabitants. According to the description provided in the brand-new trailer, the Frost Islands are a snowy collection of landmasses that used to house numerous dragon nests. This naturally attracted many adventurers, who came to the islands in search of fame, glory, and adventure, but few succeeded in slaying the dragons due to the harsh environment and relentless wildlife.

Speaking of wildlife, the stream also showed off a couple of new beasts for players to take on, such as the Goss Harag and the Tigrex. The latter is particularly interesting since it's a wyvern, which brings us to our second discussion point. Among the new mechanics introduced, the Wirebug and Wyvern Riding are probably the two that stand out the most, since they allow players to temporarily take control of the monsters they come across, either for transportation or for use in combat.

Finally, the stream ends off with an announcement regarding the demo content as well as the usual thanks and courtesies from game producer Ryozo Tsujimoto. Apparently, players can take part in the following missions within the demo, and all 14 available weapon classes will be available for use as well.

As the cherry on top, we won't have to wait that long to try out Wyvern Riding and some of the other new bits they showed off - heck, we won't have to wait at all, because the demo will be available for download on the Nintendo Switch from Jan 8 till Feb 1. To top it off, we've also tossed in some of the other videos Capcom uploaded post-stream, which provide more information on Wyvern Riding and the Wirebug respectively - check them out below!

Join HWZ's Telegram channel here and catch all the latest tech news!
Our articles may contain affiliate links. If you buy through these links, we may earn a small commission.
Previous Story
JBL's new portable speakers and TV soundbar make a splash for CES 2021
Next Story
Relive the nostalgia of your primary school days with Rubber Wrestling