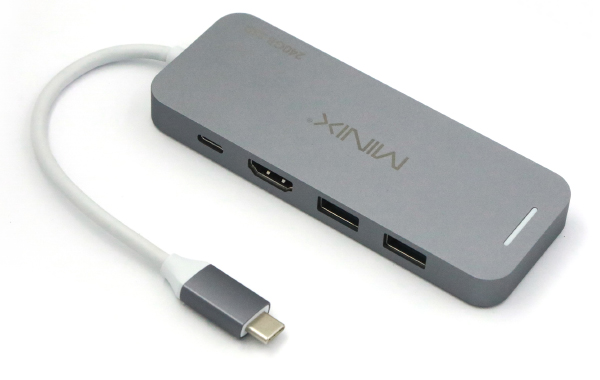 The Minix Neo Storage is one of the more interesting accessories that we have seen in a while.

On the surface, it looks like a regular USB-C hub but inside it lies an SSD drive, effectively making the Neo Storage a USB-C hub and portable external SSD all-in-one.

On the connectivity front, you will be getting two USB-A USB 3.0 ports and an HDMI port capable of outputting 4K at 30 Hz. There's also a USB-C port but that's only for power.

Although it's only a SATA-based M.2 drive and not a speedier PCIe-based one, transfer speeds were respectable given that it has to double up as a USB-C hub.

In my tests, I got sequential read and write speeds of around 420MB/s and 411MB/s respectively. That's higher than Minix's claims of 350MB/s both ways and also quite comparable to a standard USB portable external SSD.

I found the Neo Storage to be a nifty little device, especially if you have a notebook that only comes with USB-C ports. I only wished that it came with an Ethernet port — that would have made it perfect.

The Minix Neo Storage with 120GB is priced at S$120 while the 240GB version is S$150. It goes without saying that the 240GB is the better value option. Regardless of the storage amount you pick, the Neo Storage USB-C/portable SSD comes with a three-year warranty.

Join HWZ's Telegram channel here and catch all the latest tech news!
Our articles may contain affiliate links. If you buy through these links, we may earn a small commission.
Previous Story
Mophie's multi-device wireless charging pads available now at Apple Singapore
Next Story
The Kärcher FC 5 Cordless floor cleaner is able to pick up wet and dry dirt in a single step