Microsoft's new consoles: Xbox One S and 'Project Scorpio', the most powerful console yet

Microsoft's new consoles: Xbox One S and 'Project Scorpio', the most powerful console yet

Microsoft announced not one, but two new Xbox One consoles during their Xbox E3 2016 Briefing yesterday: the compact Xbox One S, and its more powerful, yet-to-be-named counterpart that’s currently referred to as "Project Scorpio."

The Xbox One S is essentially a downsized version of the original Xbox One. Microsoft is calling it their smallest and most compact Xbox console ever, and it’s not hard to see why, considering that it’s a good 40% smaller than the Xbox One. What's more surprising is that they managed this degree of compactnes even after integrating the power brick directly within the Xbox One S! Say goodby to the old clunky external power brick. And if it's not yet obvious, the refreshing "robot white" color scheme is another welcomed change with this updated console.

It even offers slightly better performance than the standard Xbox One too, as it now boasts 4K Ultra HD video support for 4K Blu-ray movies and content streamed from Netflix and Amazon Video. Your videos and games should be noticeably more vibrant as well, thanks to its newly implemented High Dynamic Range (HDR) capabilities.

Launched alongside the Xbox One S is the new and improved Xbox One wireless controller, which shares the same white color scheme as the console, on top of new textured grips on its back. It now supports Bluetooth connectivity as well, allowing you to pair it up with your Windows PC / notebook / tablet. 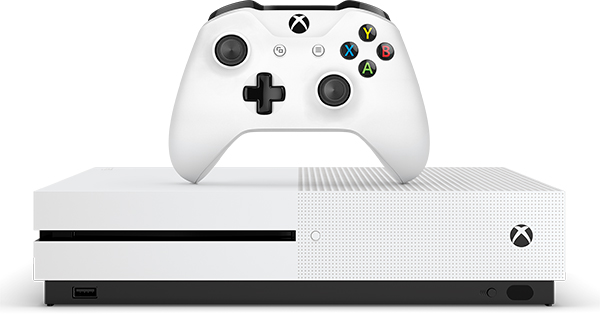 A limited launch edition version of the Xbox One S (which comes with a 2TB HDD) will be available in ‘select markets’ beginning August 2016 for US$399, alongside two standard versions with a 500GB HDD and a 1TB HDD, respectively. The former will be going for US$299, while the latter can be yours for US$349.

The new Xbox One controller, meanwhile, will be available worldwide from August 2016 onwards for US$59.99.

Then we have ‘Project Scorpio’, a beefed-up version of the Xbox One which Microsoft says will be ‘the most powerful console ever created’ when it launches during the holiday season of 2017.

Not only will Scorpio be able to run games in 4K resolution (3,840 x 2,160 pixels), it will likewise be capable of delivering a silky-smooth virtual reality experience – made possible by its octa-core processor and GPU that can generate up to six teraflops of unadulterated performance. If were to hazard a guess, it's probably a compact Windows 10 machine running AMD's Zen processor and AMD's new Polaris GPU. But that's just us.

Don’t worry, all of your existing Xbox One games and accessories will be compatible with Microsoft’s new lineup of Xbox One consoles. Although you can expect your games to run better specifically when you’re playing them on the Scorpio because of its beefier hardware.

While Microsoft has yet to unveil the price of Project Scorpio, it would probably be safe to assume that it would be priced slightly higher than the current Xbox One.

Join HWZ's Telegram channel here and catch all the latest tech news!
Our articles may contain affiliate links. If you buy through these links, we may earn a small commission.
Previous Story
Here are the winners of this year's Apple Design Awards
Next Story
Apple’s Swift Playgrounds app helps you learn code on the iPad