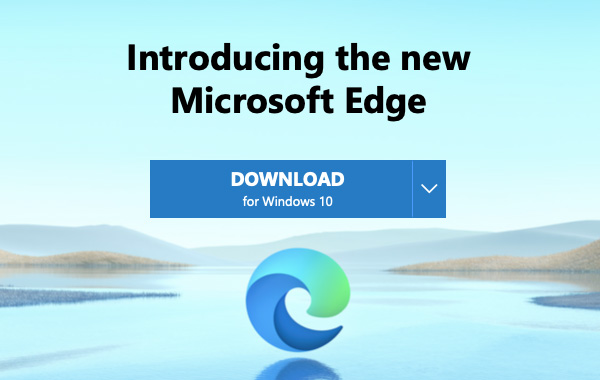 The company announced late last year that is new Edge browser would be ready in mid-January and they have delivered on schedule.

The new Chromium-based Edge, which Microsoft is called the new Microsoft Edge, will be available for download and for free on all major operating systems including Windows, macOS, Android, and iOS.

The decision to move to Edge started around late 2018. EdgeHTLM, the underlying engine for the old Edge browser, has failed to gain any significant market share and has its share of security issues.

This prompted Microsoft to decide  to reboot Edge and use Chromium instead. Chromium powers the majority of web browsers today including Chrome, Vivaldi, Opera, and many more.

Unsurprisingly, the new Edge will feature close integration with Windows, specifically with Office. However, many of these features have yet to ship today and will be added in the near future.

Given Google's attitude toward data collection, Microsoft is also touting the privacy and security features of the new Edge browser as a reason why users might want to jump ship.

Join HWZ's Telegram channel here and catch all the latest tech news!
Our articles may contain affiliate links. If you buy through these links, we may earn a small commission.
Previous Story
Ninja is getting his own Fortnite skin
Next Story
Samsung, LG, Panasonic and Philips will bring Filmmaker Mode to their TVs starting in 2020