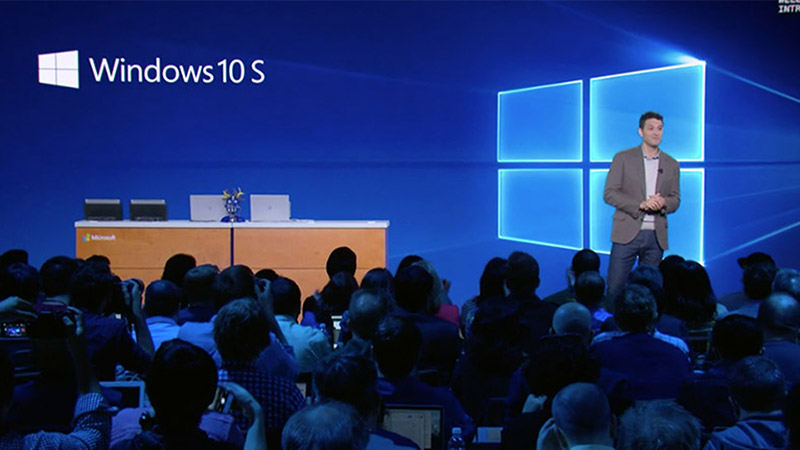 Looking a lot like the regular Windows 10 OS, Windows 10 S (where the S stands for streamlined, secure, superior performance, and the "soul" of Windows) has one important difference: it only runs apps from the Windows Store. But one shouldn’t confused this with Windows RT, the short-lived OS that Microsoft designed for ARM-based processors and which couldn’t run desktop apps. Windows 10 S technically can run desktop apps, just that they’ve to be specially packaged and made available through the Windows Store.

By limiting apps that meet the Windows Store criteria and executing them in a container once downloaded to the device, Microsoft is able to pitch a higher level of performance (e.g., first sign-in in 15 seconds, and subsequent ones in 5 seconds) and security, which are crucial for devices running entry-level hardware components and meant to be deployed en masse in schools. It’s also important to note that should one decide that he or she needs to run desktop apps not from the Windows Store, there’s an upgrade path from Windows 10 S to full Windows 10 Pro.

Also announced in today's education-focused special event in New York City was that the individual apps in the Microsoft Office suite are coming to the Windows Store. Microsoft Intune for Education is also available starting today to simplify device enrollment for school IT admins; and Microsoft Teams, which is already available to education customers as part of the Office 365 Education suite before today, is gaining new tools to boost classroom collaboration. The latter is available as a preview today, with general availability planned for this summer. There's also Code Builder, a new in-game feature for Minecraft: Education Edition that aims to inspire educators and students to learn to write code to explore, create, and play in the full 3D Minecraft world.

Devices-wise, the first laptop to run Windows 10 S looks to be Microsoft's own Surface Laptop. But with a starting price of US$999 and sporting some pretty high-end specs, this is decidedly not a low-cost PC. For that segment, Microsoft is leaving that mostly to its hardware partners. Acer, ASUS, Dell, Fujitsu, HP, Samsung, and Toshiba will be making Windows 10 S-running “education PCs”, with prices starting at US$189. This new crop of education PCs will come with a free 1-year subscription to Minecraft: Education Edition and free Office 365 for Education with Microsoft Teams. To push more schools to take up Windows 10 S, Microsoft is also making the OS free for all schools on their current genuine Windows Pro PCs. Join HWZ's Telegram channel here and catch all the latest tech news!
Our articles may contain affiliate links. If you buy through these links, we may earn a small commission.
Previous Story
The Microsoft Surface Laptop is basically the Surface Book done right
Next Story
The Cooler Master MasterKeys Pro M RGB gives you a number pad in a smaller 90 per cent form factor