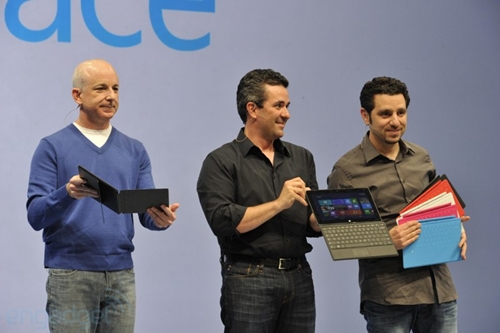 The rumor mill appears to be right on the mark as Microsoft unveiled not one, but two tablets known as Microsoft Surface tuned for variants of their new Windows 8 operating system. There will be two options available for consumers: an Intel-powered Surface with Windows 8 Pro, and an ARM-powered Surface with Windows RT. They might look the same on the outside, but they do differ considerably on the inside. Read on to find out how they are analogous but not quite the same. 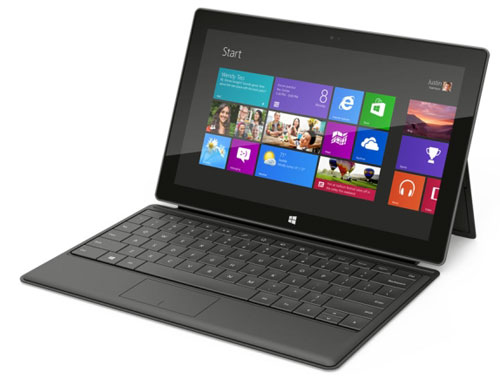 The Surface for Windows 8 Pro is powered by Intel's Ivy Bridge Core i5 chip, has a 10.6-inch ClearType full HD display, and comes with USB 3.0 support. The USB 3.0 slot is an added incentive over the Surface for Windows RT as well, since the latter is fitted with a slower USB 2.0 variation instead. For a tablet of its class, however, the Surface for Windows 8 tablet seems to a little too heavy (860g) and thick (13.5mm) for our liking. Other hardware specifications include a microSDXC slot, Mini DisplayPort, and storage estate in 64GB and 128GB options. The tablet also features accessories like a magnetically-attached Touch Cover and Type Cover. Besides acting as a protective shield, the Touch Cover also features a pressure-sensitive keyboard, a trackpad, and the ability to blend its colors with your selected folio hue (check out the image below), while the Type Cover is armed with a physical keyboard (shown above) and trackpad. 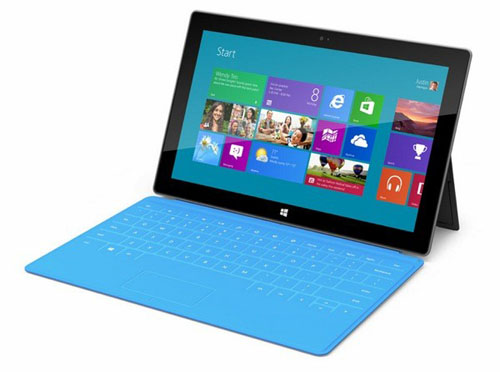 The 10.6-inch Surface for Windows RT runs on an NVIDIA-made ARM chip, and comes in a sleeker (9.3mm) and more lightweight (680g) form factor. It also carries a similarly-sized display but is reinforced with Gorilla Glass, while the tablet itself is wrapped in a magnesium VaporMg case. Like the Surface for Windows 8 Pro, the Windows RT-based tablet also features accessories like the Touch Cover and Type Cover. Ports on the tablet include HDMI, microSD, and USB 2.0 (take note!). Storage options are available in a more conservative 32GB or 64GB capacity, and the tablet's Wi-Fi needs are taken care of by 2x2 MIMO antennas like its Windows 8 Pro brother. Other features include a built-in camera and a dual-array microphone. The Windows 8 RT Surface tablet also comes preloaded with Office Home and Student 2013 RT.

The Surface tablet with Windows 8 Pro (running the Intel chip) is slated to arrive in stores three months after the launch of Windows 8. Given that we expect the OS to be available in late Q3 or early Q4, that means this is likely to be available early next year or if we're more optimistic, perhaps even this Christmas.

However Surface for Windows RT will be available with the general release of Windows 8, according to Microsoft.

Microsoft's name of choice for their new tablets is a strange one, however, which may lead some to confuse the two tablets with Microsoft PixelSense, a touch computing and interaction platform formerly known as Microsoft Surface as well (more info of the previous Surface available here and here).