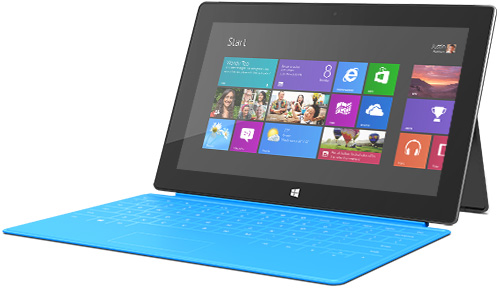 Microsoft has just revealed the prices for the Microsoft Surface RT tablet that will be launching on April 5, 7pm in Challenger's flagship store at Funan. The 32GB base model will retail for a very reasonable S$668, while the tablet with a Touch Cover bundle will cost S$798.

Take note that unlike in the U.S., at the moment, the Touch Cover will only be available in black, white and cyan. It costs S$168 on its own, which means the bundle will save you a tidy sum of S$38. There's also the 64GB model that's priced at S$798, and a Touch Cover bundle at S$938.

From our review of the Surface RT and its starting local price of just S$668 (in the U.S., it starts at US$499), it's priced rather competitively. Of course, that will only get you the 32GB model, which we should point out that it only has 16GB of free usable space while the OS, pre-installed apps and Office 2013 for Windows RT occupy the rest of the space. The built-in microSDXC slot allows you to easily expand storage as and when you need it, but we would still recommend the 64GB edition for those who tend to store a lot of media files or populate their device with an excessive number of apps.

Challenger members will also get to enjoy a discount of S$10 for the 64GB Surface RT with Touch Cover bundle. As part of a special launch promotion with Challenger, each Microsoft Surface RT purchase on April 5 at Challenger Funan will also entitle you to a S$100 Challenger voucher (for first 100 customers) and a 10,400mAh Valore Powerbank (worth S$109). Of course, it's while stocks last, so make your move fast to get the best deal.

The S$100 voucher can also be used to get additional Surface RT accessories, but it's only valid on your next purchase. That means you can buy your Surface RT, queue up again and get both the video adapters (S$58 each) with the voucher for only S$16.

For other accessory options to improve the usability of your Surface RT, here's the list of items that will also be immediately available for sale:

Among the accessory options, we would suggest opting for one suitable video output adapter according to your external display device's connectivity (VGA or HDMI) and perhaps pick up another 24W power adapter so that you can leave one at home and one at work. More importantly, if you're going to indulge in heavy productivity tasks like long emails and heavy use of the Microsoft Office suite, we would strongly advise skipping the Touch Cover bundle option and purchase the Type Cover which is a tactile keyboard with real key travel. Our experience with the Type Cover is far superior and we think it's worth the high cost. The only downside of the Type Cover is that it's only available in black.

The Surface RT will also come with a 1-year limited international hardware warranty, as well as 90 days of assisted phone/chat support. For quicker access to this assisted support and to be able to request for hardware service, customers are encouraged to register their Surface.

For a defective unit, you can do a one-to-one exchange with the retailer, as long as it's within seven days of purchase. However, the unit must pass a check first. More specifically, the retailer will be checking for customer induced damages and tampering, such as broken or cracked screens and liquid damages. A unit that has been tampered with, or without its accessories and retail box will be rejected.

After the 7-day window, you would have to sign-in to the Microsoft Online Service Center for troubleshooting. If a hardware issue is identified, a ticket will be issued. You'd then be asked to drop off the defective unit at a Cyberactive outlet of your choice and pick up the replacement unit. Again, the unit has to undergo a check on the spot to ensure that it's eligible for exchange.

For now, the warranty and support options are only applicable in countries that officially retail the Surface. There isn't any warranty extension options available at this point of time.

Meanwhile, to get the full details of the Surface RT tablet and our experience, do check out our review from last month.

Join HWZ's Telegram channel here and catch all the latest tech news!
Our articles may contain affiliate links. If you buy through these links, we may earn a small commission.
Previous Story
3 Gbps Internet from a Ceiling Lamp
Next Story
HTC One to be Available in Asia Pacific before end of April (Update)