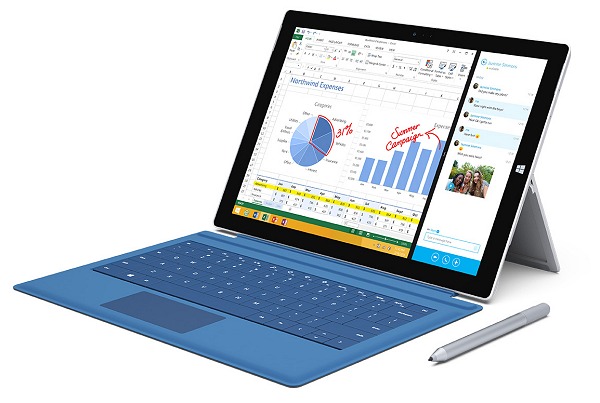 Microsoft has just announced a refresh to its Surface Pro 2 with a larger, sleeker and more enticing Surface Pro 3.

Dubbed as the tablet that can replace your laptop, it posses several key updates that might just deliver its marketing tag line. While its internal hardware still relies upon the Intel 4th generation Core processors (Haswell) and comes with up to 8GB memory and storage capacities that range from 64GB to 512GB, the following have been improved upon the Surface Pro 2:-

The new Surface Pro 3 will be available in multiple hardware configurations ranging from an Intel 4th generation Core i3 / i5 / i7 processor, 4GB or 8GB RAM, and storage options of 64GB, 128GB, 256GB and 512GB editions. Microsoft states that the based model will retail from US$799. This definitely compares a lot more favorably to the Surface Pro 2 launch price. Here's the full configuration and pricing details:-

All versions of the Microsoft Surface Pro 3 come bundled with a new Surface Pen. Encased in aluminum and supporting 256 levels of pressure sensitivity with Palm Block technology (basically palm input rejection), it interfaces with the Surface Pro 3 via Bluetooth 4.0. Additional pens cost US$49.99.

Microsoft's acclaimed Surface Pro Type Cover that converts the tablet into a full fledged notebook is still optional, but is available for US$129.99. This is similar to the version sold currently with the Surface 2 series, except that it's larger to accommodate the bigger screen of the Surface Pro 3. If you have older Surface covers, it will also work with the new Surface Pro 3 as it uses the same magnetic click interface.

Locals who've been displeased by the extremely late local availability of the NVIDIA Tegra 4 powered Surface 2 and the void of Surface Pro 2 availability to-date - you would be pleased to note that it's slated to be available in Singapore by the end of August!

Roll-out begins from the pre-order phase that begins in the US on 21 May, 12.01am EDT on Microsoftstore.com, Microsoft retail stores and selected third party retailers.

On 20th June, customers living in the US and Canada can purchase it via the above mentioned channels.

Join HWZ's Telegram channel here and catch all the latest tech news!
Our articles may contain affiliate links. If you buy through these links, we may earn a small commission.
Previous Story
Video of Samsung Galaxy S5 Active Leaked (Updated)
Next Story
M1 and StarHub to Jump On VoLTE Bandwagon Soon