It was only three months ago that Microsoft unveiled HoloLens, an untethered augmented reality headset that creates a virtual world on top of the real world, through image and object overlays. And it goes beyond just you seeing a cool 3D object or hologram; you can also interact with it, Minority Report-style.

Based on the company’s Windows Holographic computing platform and backed by a set of Windows 10 APIs, the HoloLens can be seen as yet another device class (like PC and Xbox) that runs Windows; and the holographic experiences that developers create are basically your universal Windows apps.

As you can probably imagine, Microsoft has grand plans for its AR platform, beyond building virtual worlds in Minecraft, and into territories and applications like 3D printing, planetary exploration, and of course, remote virtual helpdesk. And today at Build, we’re shown more use cases for this cool “mixed reality” tech.

In a nutshell, a mixed reality is a blend of augmented reality and the physical world. In today’s HoloLens demo, we saw how holograms can exist anywhere in a space, from a virtual movie player on the wall that follows you around, to a virtual calendar that you can put on a real table, to even a beachball-lookalike thing on a coffee table for weather alerts. It’s fascinating and yet crazy at the same time. 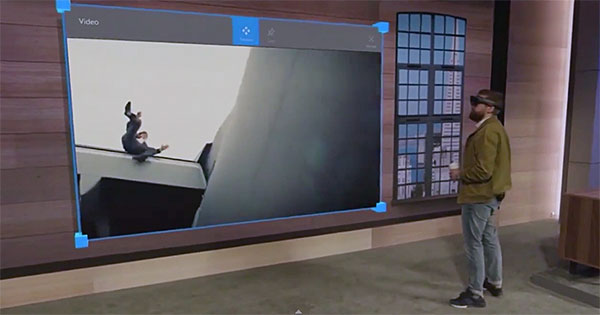 Then there was another demo where a small contraption without much of a shell drove onstage, and through the headset, what the wearer actually saw was a cute robotic hologram. Expectedly, the virtual-robot-atop-a-real-robot thing could move around, drawing mapping data from the HoloLens (as such, the robot doesn’t require its own sensors), and the HoloLens-wearing presenter could interact with it.

As mentioned earlier, Microsoft thinks Windows Holographic and HoloLens would be huge for businesses too. Other possible use cases talked about include architects using the headset to amend their designs and medical students learning about the human anatomy in 3D.