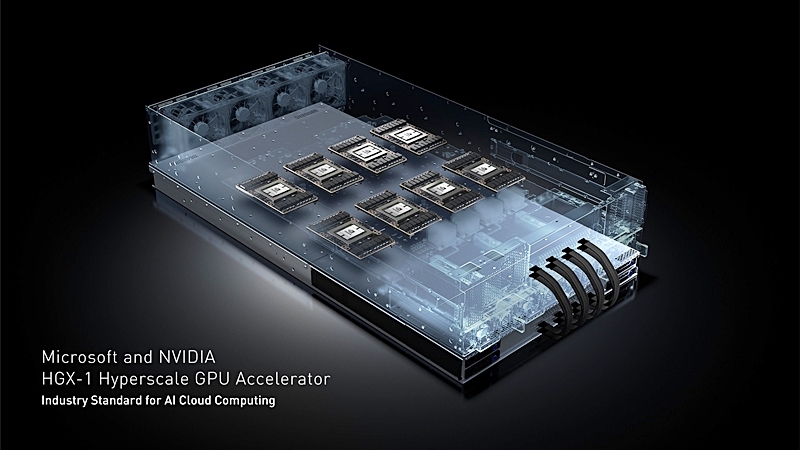 Microsoft, NVIDIA, and Ingrasys (a FoxConn subsidiary) have announced HGX-1 platform standard for artificial learning and machine learning cloud computing. The main driving component of the platform is actually the hyperscale, HGX-1 AI GPU accelerator, which comprises eight NVIDIA Tesla P100 GPUs that are connected by NVIDIA NVLink interconnect technology. The GPUs are connected to the CPU via PCIe lanes. According to NVIDIA, this allows cloud service providers that standardize on the HGX-1 infrastructure to offer customers a range of CPU and GPU machine instance configurations.” In short, the HGX-1 platform standard is flexible in its hardware setup in order to meet the challenging compute requirements for artificial and machine learning. The other barrier to overcome is the latency faced when the computing infrastructure is located off-premise, i.e., cloud-based computing.

According to the three tech firms, the HGX-1 platform is a 100 times more efficient than a CPU-based system for deep learning. There are also significant cost savings as the platform's price tag will be about 10- to 20% of “previous” AI systems.

The open-source HGX-1 platform is released in conjunction with Microsoft’s Project Olympus, which is the “next generation hyperscale cloud hardware design and a new model for open source hardware development with the OCP community.” The HGX-1 platform standard is also viewed as a collaborative contribution to the Open Compute Project, “a consortium whose mission is to apply the benefits of open source to hardware and rapidly increase the pace of innovation in, near and around the data center and beyond.”

Join HWZ's Telegram channel here and catch all the latest tech news!
Our articles may contain affiliate links. If you buy through these links, we may earn a small commission.
Previous Story
The most expensive iPhone 7 case by Louis Vuitton costs over US$5,000
Next Story
Singapore's first supercar unveiled at Geneva Motor Show