Microsoft has Halo on the HoloLens

Microsoft has Halo on the HoloLens 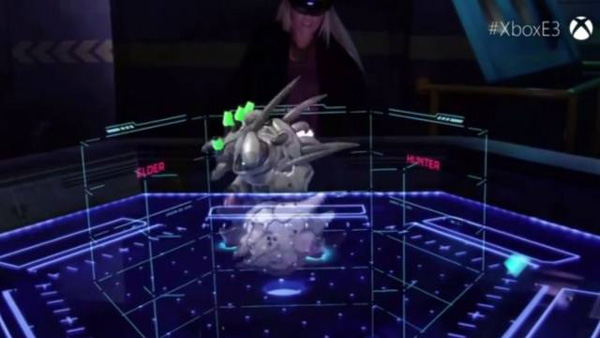 Halo 5 is a hot property right now. Not only is it the latest entry in Microsoft's multi-billion dollar gaming franchise, it's also the first game in the series built specifically to run on the Xbox One. To say that there's a lot riding on the success of the game isn't hyperbole. With the Xbox One lagging behind the PS4 in lifetime sales, Halo 5 being a runaway success is what Microsoft really needs right now.

While the HoloLens won't be out anytime in the foreseeable future (we're betting CES or E6 2016 will have the device's release date), Microsoft hasn't been shy in showing off their holographic headset every chance they get. What they've been bashful in showing however is how games will make use of the HoloLens. We've known for a while now that Minecraft will playable on the HoloLens, but Microsoft has been tight lipped on what other games we might be seeing on the device.

Attendees are made to wear the HoloLens in what appears to be a UNMC ready room, before being taken to the briefing room on the UNSC Infinity's bridge by following the holographic waypoints visible via the HoloLens.

On the bridge, a holographic briefing is done via a giant table. In the HoloLens briefing, Commander Sarah Palmer (you might remember her from Halo 4's main campaign and the Spartan Ops mini-campaign mode) gives the attendees the lowdown on what maps the new Warzone mode will bring, as well as the opposition and general tips. All the while, holographic images corresponding to the points of Palmer's speech flash on the Hololens display.

It might not be exactly Halo 5 running on the HoloLens, but at least it's technically Halo on the HoloLens. We're excited enough with what Microsoft might be cooking up for the series on the HoloLens that we don't really mind that a glorified video demo is all Microsoft has to show off for it right now. We also suggest Microsoft rename the HoloLens, and call it the HaloLens instead.

Join HWZ's Telegram channel here and catch all the latest tech news!
Our articles may contain affiliate links. If you buy through these links, we may earn a small commission.
Previous Story
Razer launches new Mamba gaming mouse that allows you to customize the force of your clicks
Next Story
If you're willing to jump through hoops, Windows 10 Mobile Build 10136 is out now