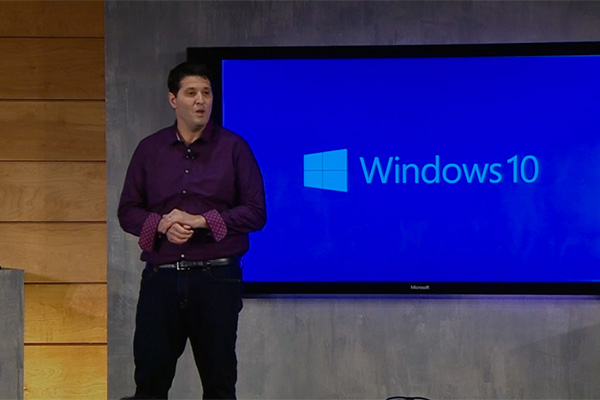 September last year was the first time we heard about Microsoft’s Windows 10, some of its few key consumer and business features, and the Windows Insider Program, which has now seen 1.7 million signups providing feedback for the upcoming OS. And just a few hours ago, in another official major reveal, the Redmond-headquartered company unveiled more details about its “most comprehensive operating system“ and ”best-ever enterprise platform".

Free for the 1st year

The first big reveal by Terry Myerson, executive vice president of the Operating Systems group at Microsoft, was that for the first year after Windows 10 is available, it will be a free upgrade for all devices running Windows 8.1, Windows Phone 8.1, and even Windows 7. More importantly, when a device is upgraded to Windows 10, it’ll be kept current for its supported lifetime. Interestingly, Myerson used the words “Windows as a service”, which is the clearest indication yet how Microsoft sees its OS moving forward.

For Windows RT, Microsoft is still deliberating its upgrade options, so there's nothing to share at the moment. 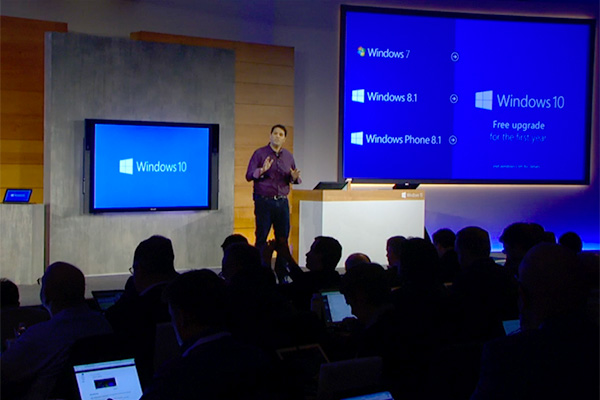 Regarding new consumer-facing features, the first thing shown off by Microsoft’s Joe Belfiore was Cortana. Yes, Windows Phone 8.1’s intelligent and funny digital personal assistant is coming to Windows 10. (Microsoft says "select markets"; we're trying to find out which.) And it’s all about providing the most natural way to interact with your device, be it a PC, tablet, or phone. Cortana on Windows 10 sports integrated search across device (including files on device), the Internet, as well as personal and professional clouds. But it goes beyond search. For example, you can issue commands through voice (e.g., play/pause a music track), and even dictate and send an email, all without touching the keyboard and mouse. 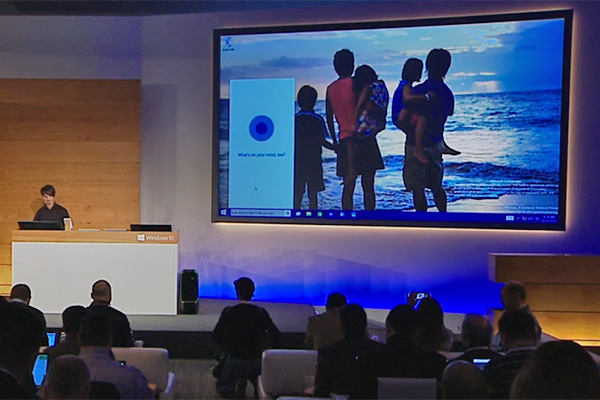 A version of Windows 10 is also being tailored for devices smaller than 8 inches. Some UI changes include a whole Start Screen background image (instead of being split over the Tiles), Action Center that’s synced to the PC, a more organized Settings app, inline replies for notifications, a floating Word Flow keyboard, and a new messaging app that can integrate with other IP-based platforms like Skype. 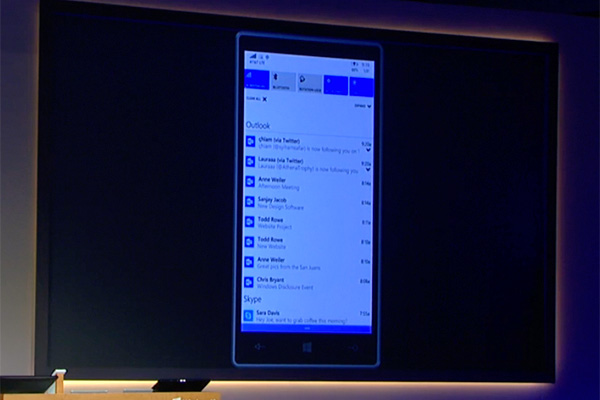 Microsoft’s solution to a consistent experience across devices is universal apps. There will be a new version of Office (Excel, PowerPoint, Word) for phones and small tablets, and it supports wireless printing. While it looks similar to Office for iPad, it’s obviously designed for the smaller screens. Framerates looked smooth too, due to hardware acceleration. There’s also a universal Outlook email client, with a full Word engine and swipe gestures for flagging and deleting messages. Again, it will look and behave similarly across phones, tablets, and PCs, so as to make it easy for users to move from one device to another. 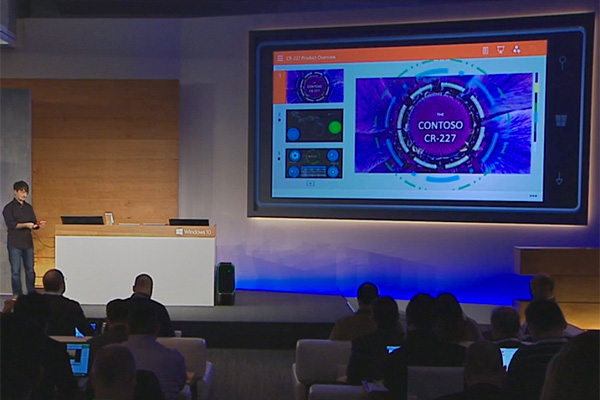 Other built-in universal apps include Maps, Music, OneDrive, People, and Photos. Highlights include Cortana integration in Maps, and your music collection in OneDrive. The Photos app in Windows 10 certainly looks more streamlined too, with a Collection view that does away with duplicates. There’s also automatic photo enhancement and album creation (with nice formatting) in this first build that’s coming to Insider participants.

For developers, Microsoft clearly feels that a unified app store is the best way for them to monetize their apps. 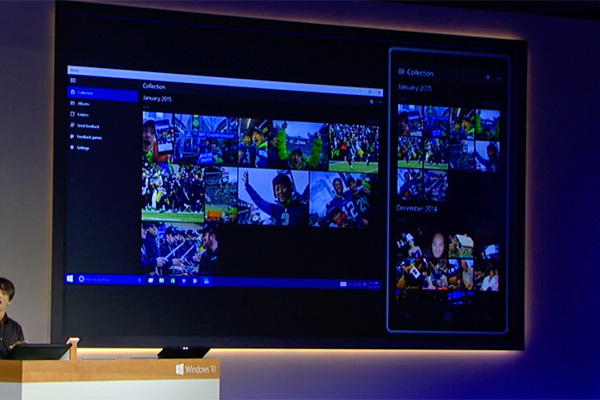 As expected, there will be a new browser for Windows 10. Codenamed Spartan, it has a new rendering engine and a note-taking mode whereby the webpage is frozen to let you comment or draw on it directly. You can save segments of it to OneNote or share and save the whole page. Other features in Spartan include a Reading Mode for distraction-free reading, a Reading List that supports offline reading and which syncs across devices, and Cortana integration. Clearly, Spartan isn’t quite done yet. Insiders will get to experience it in the coming 3 to 5 months. 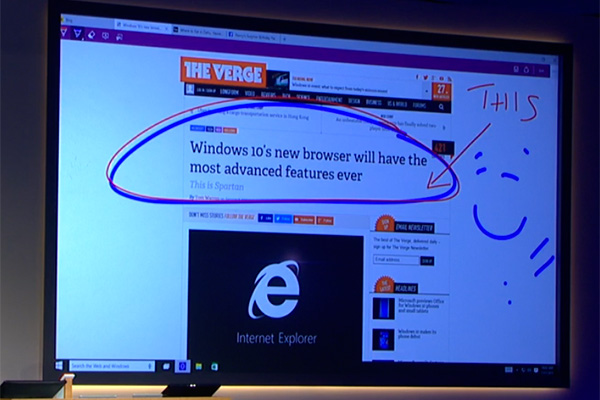 Regarding gaming on Windows 10, Phil Spencer, Microsoft’s Xbox and gaming chief, said it will be “more social and interactive”. There will be an Xbox app for the new OS, with all your games, complete with activity and friends lists similar to Xbox One. You can chat with people on Xbox Live, compete with them (across Xbox One and Windows 10), and access your achievements and recorded game clips. Heck, there’s even a shortcut (Windows key + G) to bring up a UI for saving game clips. And later this year, Windows 10 will allow streaming of Xbox One games to any Windows 10 PC or tablet.

Game developers are also given more control of the CPU and GPU. Built into Windows 10 is DirectX 12, and Microsoft is touting up to 50% increase in game performance. Unity, a cross-platform game creation system, was revealed to be the latest to adopt DirectX 12. Lastly, Fable Legends, an upcoming cooperative role-playing video game developed by Lionhead Studios and published by Microsoft Studios will appear on both Xbox One and Windows 10. And yes, in addition to bringing the Xbox experience to Windows 10, Microsoft is also bringing Windows 10 to the Xbox. More on that should be revealed at GDC (Game Developers Conference) in March. 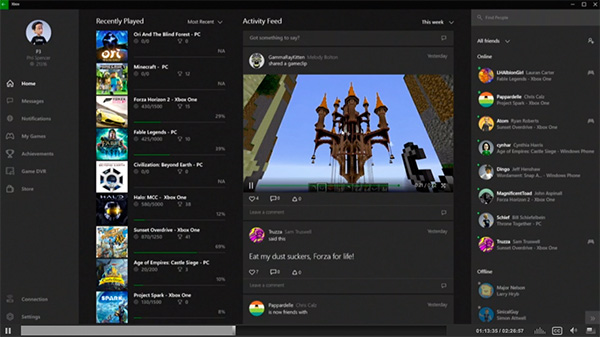 Available in 25 languages, new Windows 10 builds for PCs will arrive in the next week for Insiders, and the first build for phones will drop in February. General availability for Windows 10 is still expected to be at the end of the year.

Join HWZ's Telegram channel here and catch all the latest tech news!
Our articles may contain affiliate links. If you buy through these links, we may earn a small commission.
Previous Story
The Microsoft Surface Hub is a giant 4K display running Windows 10
Next Story
The ground trembles as MSI's GT80 Titan launches locally