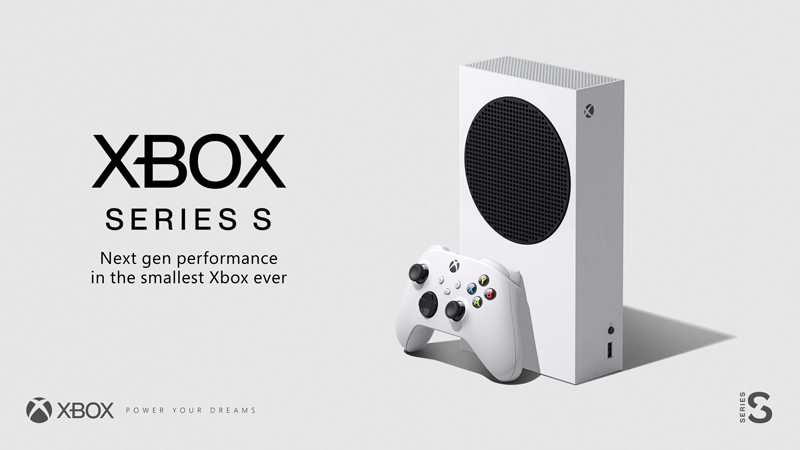 Microsoft has had a doozy of a day.

After several unfortunate leaks, Microsoft has made it official: the Xbox Series S is the smaller, more budget-friendly counterpart to the Xbox Series X, and will launch on November 10, 2020 for US$299 (around S$410).

Leaks including a picture of the console’s design and price, a snippet from a video showing off its size and the entire reveal trailer forced Microsoft’s hand here. Microsoft responded to the leaks by tweeting, “Let’s make it official,” releasing an image of the console with pricing information. Earlier today, they also published a trailer for the Xbox Series S, showing off its specs and size compared to the Xbox Series X.

The console (which many are comparing to a speaker) is the smallest Xbox ever. The Xbox Series S will let you play games at 1440p resolution at up to 120 frames per second. It also supports next-gen technology such as DirectX ray tracing, variable rate shading and a variable refresh rate. “Nearly 60% smaller than the Xbox Series X,” it's meant to be Microsoft’s all-digital next-generation console. It only contains a 512GB solid-state drive, skipping over an optical drive.

The console also supports 4K streaming media playback, along with 4K upscaling for games. The 512GB drive is fairly disappointing for a next-generation console, considering that it would support about three Call of Duty games before running into storage space issues. However, that’s probably where Microsoft’s game streaming service Project xCloud comes in handy.

An earlier report from Windows Central has also been proven true, after leaking the Xbox Series S’ launch date and price accurately. The report states that Microsoft plans to push an Xbox All Access financing option, allowing consumers to pay just US$25 per month to own the Xbox Series S.

The report also leaked the Xbox Series X’s price and launch date, stating that the more powerful console will cost US$499 (around S$683) when it launches on November 10, 2020. It will also have a US$35 per month Xbox All Access financing option. Both Xbox All Access plans involve two year contracts of monthly payments, giving players access to Xbox Game Pass Ultimate, Project xCloud and Xbox Live Gold alongside the consoles themselves.

Currently, Microsoft has not confirmed the existence of Xbox All Access and as such, we don’t know which markets it will be available in just yet. Xbox was reportedly going to reveal all this information in a September event, so we’ll likely get additional details on the Xbox Series S and Xbox All Access then.

Our articles may contain affiliate links. If you buy through these links, we may earn a small commission.
Previous Story
Philips’ latest 70-inch 4K TV supports HDR10+ and costs just S$2,699
Next Story
The Jabra Speak 750 can deliver crystal clarity to your conference calls