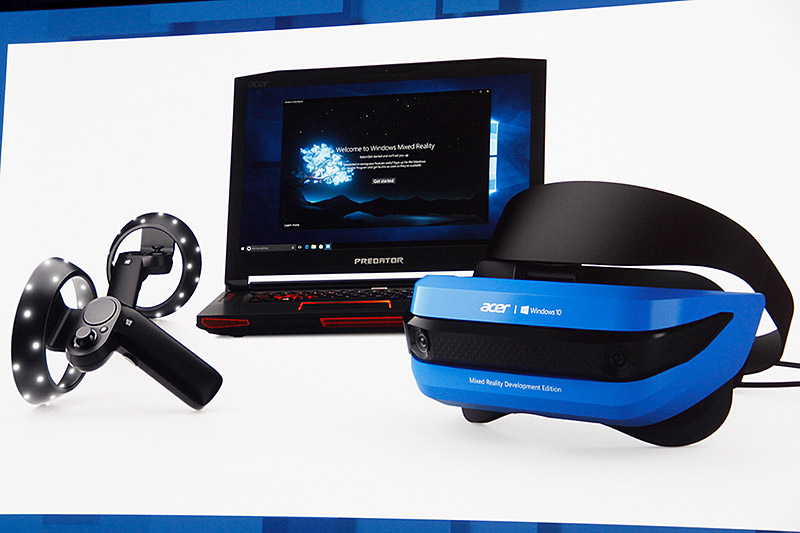 Think Windows Mixed Reality (formerly Windows Holographic) and the Microsoft HoloLens is probably the first device (maybe only?) that comes to mind.

But that won’t be the case soon. Several leading third-party hardware makers are already onboard the ambitious Windows Mixed Reality platform, which actually covers the whole spectrum from augmented reality (AR) to mixed reality (MR) to virtual reality (VR), and anything in between.

Acer, ASUS, Dell, HP, Lenovo, and 3Glasses are some of the vendors that Microsoft previously said would be shipping headsets capable of mixed reality. Designed to work with affordable PCs and laptops, prices for these headsets start at US$299. Amongst them, the Acer Windows Mixed Reality Development Edition headset has already started shipping to developers. Like the other inexpensive MR headsets, Acer’s headset touts built-in inside-out tracking, which means there’s no need to purchase or install external trackers or sensors in the wall.

But what’s good of a mixed reality headset if it doesn’t come with a good controller? Previous demos and hands-ons had the Acer headset paired with an Xbox controller, which was clearly not ideal. Microsoft knows that of course, and at Build today, it has announced the first Windows Mixed Reality motion controllers. Like the VR controllers you get with the HTC Vive, these MR controllers support six degrees of freedom (6DOF). It also supports inside-out tracking using the sensors in the headset, so no external markers are needed.

Microsoft’s hardware partners will be selling these controllers this coming holiday period, presumably with their own headsets. Acer, for example, will be selling a headset and controller bundle at a price of US$399.

Join HWZ's Telegram channel here and catch all the latest tech news!
Our articles may contain affiliate links. If you buy through these links, we may earn a small commission.
Previous Story
The OnePlus 5 smartphone will be unveiled as soon as next month
Next Story
iTunes is coming to the Windows Store