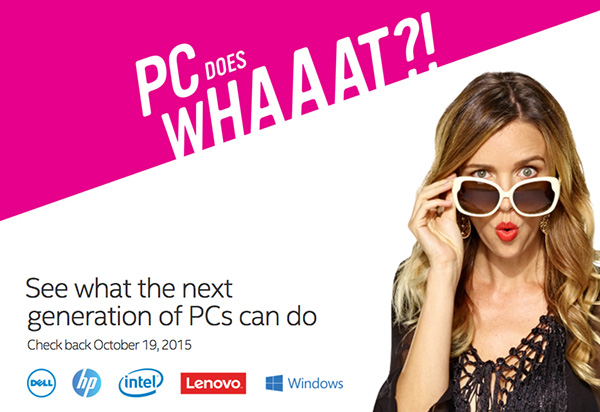 So, Microsoft, Intel, HP, Dell and Lenovo recently got together to do a combined marketing push in an effort to get consumers to shift to computers running Windows 10. Intel claims there are about 500 million old machines in the market that are naturally well due an upgrade, so why not shift to a brand new Windows 10 machine?

The spots feature characters in various settings where they get to see computers doing things that they weren’t able to do before, hence the astonished: “PC does whaaat!?” That incidentally, is the tag line for this campaign, which is a little underwhelming to say the least. After all, when was the last time we really were impressed by a laptop flipping over to become a tablet? Circa 2012?

As Business Insider reports, the campaign will be released as a six-week “burst” at first, with the possibility for extension. It’ll involve specifically-targeted ads for markets like business and gaming, and will air on TV, with print and online ads too, but it may be a case of too little too late as consumers are choosing to go longer between personal computer upgrades, instead carrying out most of their computing needs on their smartphone or tablet.

We’ve embedded the first five ads released below so you can have a look for yourself.