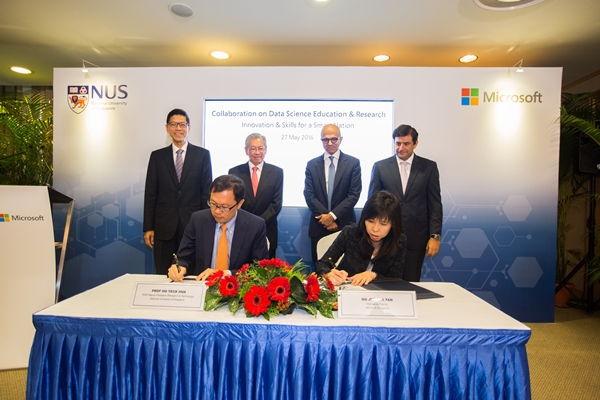 Microsoft and the National University of Singapore (NUS) have signed a Memorandum of Understanding, cementing their commitment to data science education and research. At the same time, NUS also launched the Institute of Data Science (IDS), where Microsoft is the first industry partner of the institute, and the institute’s focus will be “data science research and translation, education and related activities at NUS.”

Singapore’s Smart Nation initiative will entail a need for people who are trained in data science. Data scientists will work together with people from other disciplines in order to make sense of the vast amount of data collected on the Smart Nation network. Their collective effort aim is to make Singapore a better and more efficient abode for both businesses and residents.

Addressing the audience present at the MOU signing, Professor Tan Chorh Chuan, President of NUS, said the university is committed to its vision of being a leading, Asia-centric educational and research institution. The university also realizes the importance of data and its impact on the future of Singapore, especially with the rise of global cities and their emphasis on technology. Therefore, in addition to the signing of the MOU, he was pleased to announce the launch of IDS and its central role of coordinating and supporting data science research initiatives across NUS. IDS isn’t just a single entity as it will be a key component of the broader NUS Smart Nation Research Cluster. By the end of this year, IDS, the National CyberSecurity Lab, which is in the process of being established in NUS, will be housed together in one campus building. They will also be joined by a number of new research centers and collaborations.

Costing an initial investment of S$12 million dollars over five years, IDS’s core mission is to educate the next generation of data scientists. For a start, the institute will have more than 20 NUS faculty members from various fields of study to kick start its research projects. IDS aims to have about 100 researchers and staff working on a wide spectrum of data science projects. The institute hopes to make significant contributions to Singapore’s Smart Nation initiative in terms of data science, analytics and optimization, as well as cybersecurity. As a commitment to society at large, a total of 50 scholarships over five years will be provided by IDS to school PhD students in data science and data analytics. Professor Tan added that from this year, almost all NUS undergraduates will undergo a quantitative reasoning course, in hope of preparing them for a future “that is increasingly shaped by data, technology, and the rise of global cities.” Microsoft CEO Satya Nadella said “And data is perhaps the new currency in this fourth industrial revolution.” Collectively, Microsoft and NUS aim to enrich communities in Singapore by ensuring the success of our Smart Nation initiative.

Join HWZ's Telegram channel here and catch all the latest tech news!
Our articles may contain affiliate links. If you buy through these links, we may earn a small commission.
Previous Story
Samsung Pay Mini app available for Android and iOS in June?
Next Story
Samsung shows some love to the trendier crowd by launching the Galaxy J3 and J5