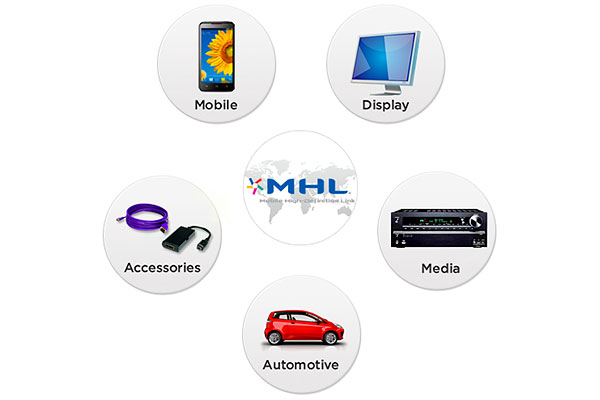 Mobile High-Definition Link (MHL) is an increasingly popular audio/video interface standard that’s adopted by consumer electronics makers in their products (such as smartphones, tablets, Blu-ray players) to allow users to connect their devices to HDTVs, monitors, and audio receivers. More importantly, MHL is connector agnostic; the most common ones being MHL-USB and MHL-HDMI. Last year, the MHL Consortium released the MHL 2.0 standard, which brought about support for 1080p videos, more 3D formats, 7.1-channel surround sound, and power charging of up to 900mA at 5V. According to the consortium, there are now more than 330 million MHL-enabled products from more than 200 adopters.

Now, the MHL Consortium has announced the MHL 3.0 spec, which brings support for 4K (ultra-HD) resolution (up to 2160p30) through the use of a bi-directional channel, HDCP 2.2 content protection, enhanced 7.1-channel surround sound with Dolby TrueHD and DTS-HD, power charging up to 10W, high-speed transfer for mass storage devices, and better Remote Control Protocol (RCP) support for input devices such as touch screens, keyboards, and mice. Expectedly, MHL 3.0 is backward compatible with MHL 1 and MHL 2.

The MHL 3.0 specification will be available for download at www.mhltech.org in early September 2013.