Mercedes-AMG's new C63 says goodbye to its V8, is now a hybrid with a whopping 680hp

Mercedes-AMG's new C63 says goodbye to its V8, is now a hybrid with a whopping 680hp 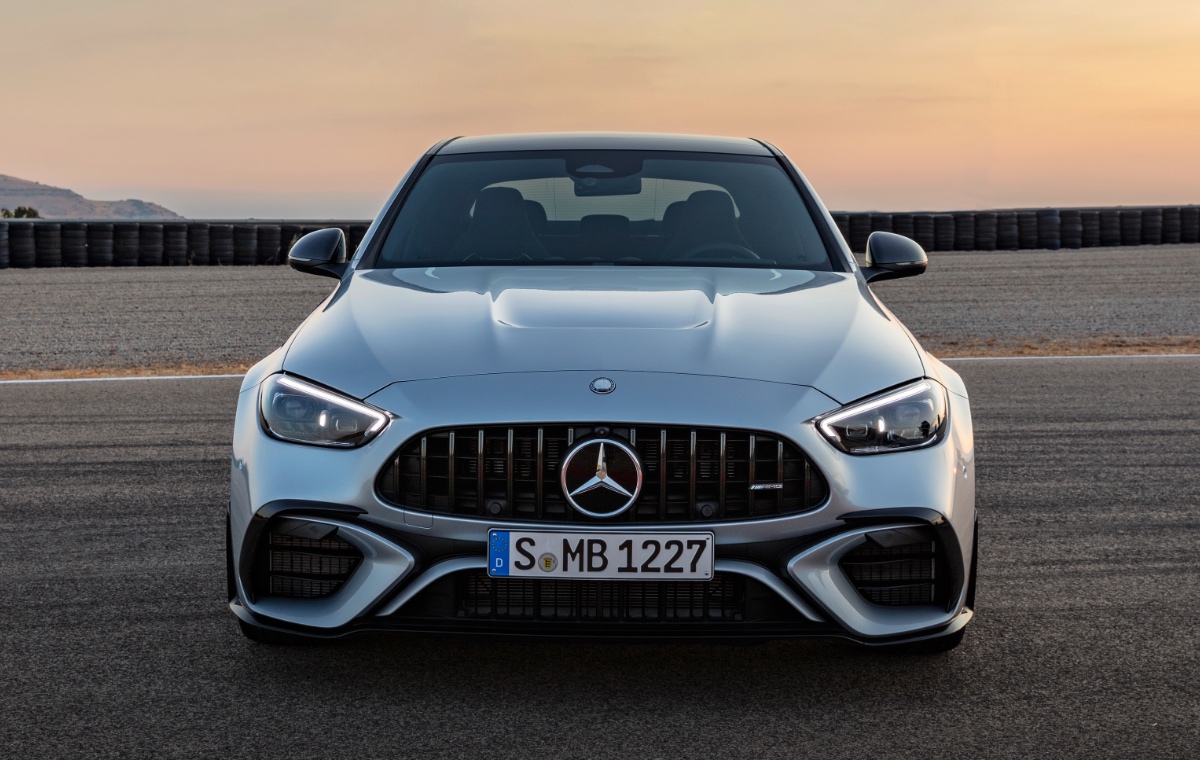 The rumours were unfortunately right. The C63's good old twin-turbo V8 is no more. This is the new Mercedes-AMG C63 S E and it's now a plug-in hybrid with a turbocharged 2-litre 4-cylinder engine. This is a big change because the C63 always had a V8. First a 6.2-litre naturally aspirated V8 in the W204 and then a a smaller twin-turbo 4-litre V8 in the later W205.

80% of this 4-pot comes from Mercedes' ferocious A45S hyper hatch. It has been slightly modified so that it can be mounted longitudinally and it has an electrically-assisted turbo. A small electric motor drives the shaft of the turbo directly, allowing it to spool up quickly before handing over duties to exhaust gases to reduce turbo lag.

The power output of this engine is now an incredible 476hp and 545nm of torque, which makes it the world's most powerful 4-cylinder engine used in a production vehicle. What's even more impressive is that's almost as much as the C63's old 6.2-litre V8 used to make. I guess you could call it progress. This engine is paired with a trick hybrid system that has a rear-mounted electric motor that operates through a two-speed transmission. The continuous power output of the electric motor is 94hp but it has a boost mode where it can provide 204hp that lasts for 10 seconds.

The peak power output of the AMG C63 S E is therefore 680hp and 1020nm of torque – that's more power than even an SLR McLaren.

The C63's main transmission is a nine-speed wet-clutch dual-clutch unit and power gets sent to all four wheels via AMG's 4MATIC+ all-wheel drive system. Claimed acceleration performance is 0-100km/h in just 3.4 seconds, which makes it the quickest C63 yet. The top speed is an electronically-limited 270km/h.

But this new C63 is also hybrid and it has a battery with a capacity of 6.1kWh. That's enough for an electric-only range of 13km. If you happen to live close enough to your place of work, you won't burn a single drop of petrol. The interior is classic Mercedes, which is to say it's very contemporary. It's mostly similar to the C200 AMG Line that I recently reviewed so it has two large digital displays and loads of fancy interior lighting.

And as for design, the changes are actually quite subtle. Sure, there's that gaping AMG Panamericana front grille and larger front intake, but the bodywork is only slightly swollen. I suspect we will see many body kits popping up for owners of lower-end C-Class cars to modify their cars to look like a C63. Interestingly, there's an estate version too for folks who need more haulage. There's no doubt the new C63 S E is a feat of engineering, but the thing I'm sniffy about is that it weighs well over two tons – 2,111kg for the sedan and 2145kg for the estate, to be exact. That makes it significantly heavier than its traditional rivals like the M3 from BMW and RS4 and 5 from Audi. The M3, despite "only" having a twin-turbo straight-six motor making 503hp, is just as fast from 0-100km/h because it's nearly 400kg lighter. One has to wonder if the C63's weight will have any negative impact on handling too. We'll have to wait until the cars are ready to find out.

For those who can't wait, the bad news is that the Mercedes-AMG C63 S E will only go on sale sometime next year. Pricing has yet to be determined but expect it to go for well over half a million dollars.

Join HWZ's Telegram channel here and catch all the latest tech news!
Our articles may contain affiliate links. If you buy through these links, we may earn a small commission.
Previous Story
Possible ARM and Samsung alliance being raised by SoftBank CEO
Next Story
Turning on keyboard haptics in iOS 16 might affect your iPhone's battery life