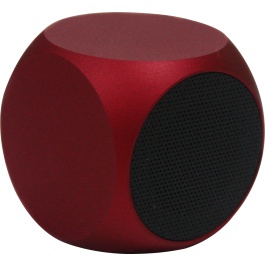 Matrix Audio has announced that it will debut the pocket-sized Qube, its smallest speaker, at the CES 2013. Weighing only 78g, the Qube is twice the weight but slightly smaller than a golf ball. Despite its compact size, the mini speaker has the ability to fill a large room with rich sound. Fused with Passive Vibrating Bass (PVB) technology, it comes with a built-in rechargeable battery for up to eight hours of continuous playback of your music or book.

Join HWZ's Telegram channel here and catch all the latest tech news!
Our articles may contain affiliate links. If you buy through these links, we may earn a small commission.
Previous Story
QP Optoelectronics to Launch CloudView DLP Ultra Short Throw Pico Projector at CES 2013
Next Story
University of Southampton Engineers Build Supercomputer out of Raspberry Pis