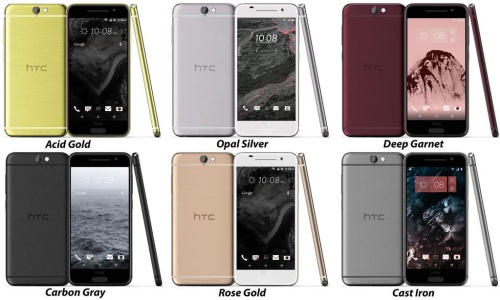 The HTC One A9 may be announced in October, but today's massive leak has revealed the design and color options for the device.

@evleaks posted an image for the One A9 which shows the device in six color options. They are acid gold, rose gold, opal silver, carbon gray, cast iron and deep garnet. As revealed in an earlier leak, the One A9 is likely to sport the same design as the Apple iPhone 6 with antenna lines at the top and bottom on the back.

Some of its alleged specs include a 5-inch Full-HD AMOLED display, a Qualcomm Snapdragon 617 processor, 2GB RAM and a 2,150mAh battery.

Join HWZ's Telegram channel here and catch all the latest tech news!
Our articles may contain affiliate links. If you buy through these links, we may earn a small commission.
Previous Story
Next-generation graphics: NVIDIA Pascal GP100 chip reportedly moving on to testing phase
Next Story
The new US$99 Samsung Gear VR is the first step toward affordable VR