Martian has just released a new smart watch, the Martian Notifier. This latest announcement adds yet another device to the surging market of wearable tech. Just last month, Pebble made its E-Paper Smart Watch available to the local market, while Samsung had announced that a Tizen-powered smart watch with SIM card slot is already in the works. Also, recent rumors are that Microsoft is also unveiling its smart watch in the near future. 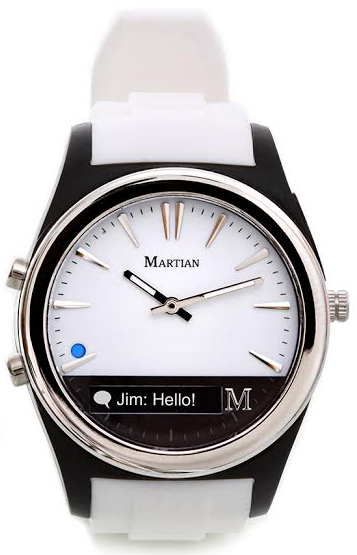 In a nutshell, the Martian Notifier is a notification-enabled smart watch that was designed for the fashion-conscious consumer. It includes a "Smart Notification" filter, and customized vibration capabilities. Its Smart Notifications app offers three levels of notification support:-

On top of an integrated OLED readout that delivers real-time alerts and notifications, the smart watch serves up convenient features, such as a touch of a Notifier button to activate your smartphone's speakerphone, enabling hundreds of voice commands to control music, check a sports score, get directions, search the web, and create a reminder or appointment, just to name a few.

You can also reject an incoming call, set silent vibrating alarms that only you will sense, get a once-an-hour tickler to remind you to take a break, turn on an LED light to see in a dark room, and control your phone’s camera shutter, and more.

iPhone users of iOS 7 or higher now have the ability to receive every notification that is shown in the iPhone’s Notification Center. Android users can receive notifications from any app that is installed on their phone.

The Martian App and Watch menus support English, Spanish, French, German, Japanese, Chinese, and Korean. Texts and emails will appear on the watch in almost any language in which they are sent (Western languages and most Asian languages).

Previous Story
Nikon Announces Pricing for the Nikon 1 J4 and AF-S DX Nikkor 18-300mm f/3.5-6.3G ED VR
Next Story
Sony: Our Most Compact XDCAM Camcorder Will Be Out This Year