Seriously, what is it with people and vampires? Halloween only comes once a year, and that was more than a month ago.

Just kidding - vampires are always pretty cool to have in a game, and while MapleStoryM’s new Demon Avenger class isn’t a vampire per se, his unique “heal-and-deal” skillset essentially allows him to be a life-draining monster in battle.

However, if you've just wandered out of a cave and have no idea what MapleStoryM is, it’s essentially a free-to-play multiplayer MMO fantasy game from Nexon Korea with more job options than a recruitment portal. Apart from being able to create your own unique character, you can also compete with friends, kill monsters, level up and go on multiplayer raids to defeat bosses for loot, among various other quests.

Once upon a time 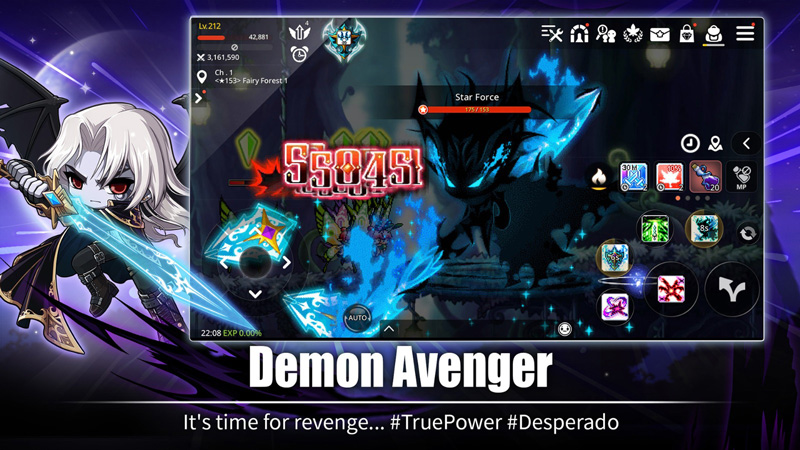 But let’s get back to the Demon Avenger. There’s a lot of ground to cover for this new character since he’s quite the unusual “specimen” where gameplay is concerned. However, we’ll get to that in a bit - there’s more to this black-clad character than just his edgy appearance and life-draining skillset.

Lore-wise, this unfortunate soul was once one of the Black Mage’s commanders, until the Mage betrayed him and slaughtered his family, leading him to resent and swear vengeance against his former master. After suffering a sound defeat at the latter’s hands, he was picked up by the Resistance - only agreeing to join them with the goal of making the Black Mage pay.

As far as backstories go, the Demon Avenger’s is pretty compelling, not to mention traumatic, and it’s hard not to empathise with the guy.

In terms of gameplay, his attacks and skills as mentioned are rather distinct from other characters in MapleStoryM’s roster due to how much they rely on HP. Every time he uses one of his abilities, his HP is drained by a specific amount, although they do offer powerful effects to match the painful cost. This makes the Demon Avenger far more tactical than your everyday “beatstick” class, since players will have to actively and continuously consider the potential returns of applying their skills.

Of course, it’s not a one-way street. To balance things out, the Demon Avenger’s loadout also features numerous vampiric skills that allow him to recover HP or buff himself based on certain prerequisites, which we personally find extremely cool. Plus, this unique mix of healing and damage also means he’s well suited both as a tank and a damage dealer, making it a rather versatile class. Life Sap basically does what the name suggests - it’s a passive that allows the Demon Avenger to drain the health of an opponent after making an attack with his trusty Desperado sword. At maximum level, the probability increases to 100%, providing an extremely reliable way for the Demon Avenger to recoup the HP costs needed for his other abilities.

Moving on, there’s Forbidden Contract, which not only buffs the character’s attack stats to absurd amounts, but also completely removes the HP costs for the Demon Avenger’s skills for a period of time. In combat terms, this gives users a short breather during intense fights where they won’t have to think about HP requirements, and as such can focus on healing through skills such as Life Sap.

Last but not least, we’ve got Overload Release, which ties in with the Demon Avenger’s class-unique Exceed mechanic. Basically, this mechanic comes in the form of a counter which provides significant buffs to certain “Exceed” skills once they’ve been used a certain number of times. However, there’s a cost for such insane power - the higher the Exceed counter, the less potent some of the character’s other skills, like Life Sap will become.

So, as you might have guessed, Overload Release allows the Demon Avenger to reset the counter and continue pummelling his opponents. As the cherry on top, the skill even converts the Overload stacks into bonus maximum HP and HP regeneration, making it the perfect complement to his other HP-draining skills. It’s truly an exciting mechanic, as this further emphasises the immaculate timing and battle strategy needed to pilot the Demon Avenger to his full capacity.

How do you join the party?

That’s easy. Having the Demon Avenger finally arrive in MapleStoryM is a huge thing, and the game is treating it as such. To celebrate the launch, all players who access the game from December 1, 2020 to December 8, 2020 will get a special one-time reward just for logging in. Additionally, from December 1 to January 12, 2021, players can also earn rewards when they reach certain levels with their Demon Avenger.

Of course, it’s only natural that levelling up a new character can take some time, but here’s where the game’s mega burning event comes in. Basically, new characters created between December 1 to January 12 can be designated as ‘burning’ characters, and all burning characters will receive an extra two levels per level up, and the bonus works all the way up to Level 100. Essentially, this means you can level up three times faster! Talk about efficiency.

So, whether you’re a MapleStoryM veteran or a new adventure-seeking player, the Demon Avenger brings good tidings and an extremely unique playstyle for everyone to try out. Check out these events and earn lots of rewards to go with your spanking new characters!

Our articles may contain affiliate links. If you buy through these links, we may earn a small commission.
Previous Story
Vivo V20 SE entry-level selfie smartphone launches on 12 December in SG
Next Story
ViewSonic reveals new 15.6-inch portable monitors for road warriors (Updated)