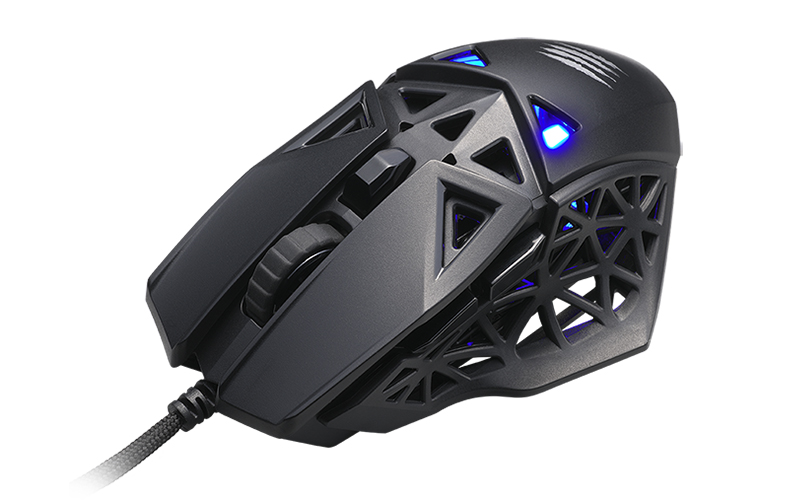 Mad Catz has announced the MOJO M1, its first foray into the ultralight gaming mouse space. However, unlike the more common honeycomb pattern that many ultralight mice have adopted, the M1 features triangular cutouts for a more aggressive look. The mouse shell is also not entirely perforated, and the area where you would rest your palm is still solid plastic.

That may partly account for the M1's weight, which at 70g isn't actually the lightest around when compared to competitors like the 53g Cooler Master MM710.

The M1 is an ergonomic mouse for right-handers, featuring a ledge for you to rest your thumb on the left. Mad Catz describes the mouse as a "hollow pyramid design", suitable for both claw and palm grip styles. It looks like it's got a fairly prominently arch as well, so it makes sense that it wouldn't be the best for the fingertip grip. 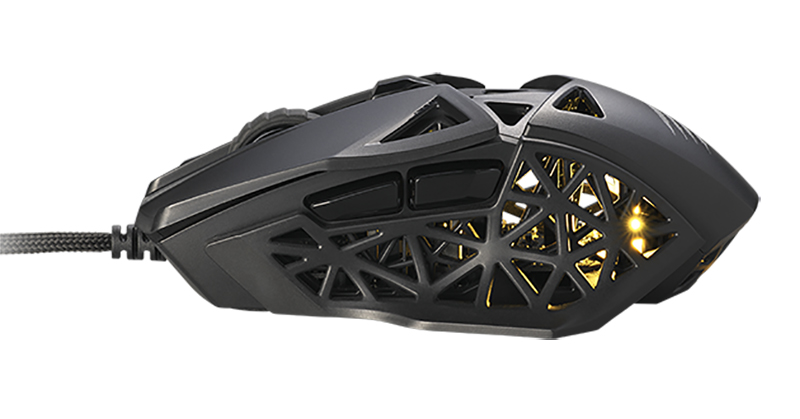 The built-in RGB lighting can be adjusted directly on the mouse without the need for any drivers or software, but that's also probably where some of the additional weight is coming from. Still, 70g is already plenty light, and it's a vast improvement from some of Mad Catz's older mice.

A 12,000DPI PixArt PMW3360 optical sensor sits at the heart of the M1. This sensor is widely regarded to be one of the best on the market, with no acceleration or jitter, so you can expect tracking to be flawless on the M1.

One unique feature is the Mad Catz DAKOTA mechanical switches, which make their debut on the M1. Many manufacturers are attempting to market quicker switch response times these days, such as with Razer's optical switches and analog switch technology on the Endgame Gear XM1. The DAKOTA switches do the same, featuring a new signal detection technology that enables instant response times when two contact points touch each other. This is intended to get around the traditional debounce time required after the metal contacts in a switch touch each other, and Mad Catz says its technology can bring down switch response times to under 2ms.

Finally, the M1 is equipped with a paracord cable, which should mean improved flexibility and less cable drag. The mouse is currently expected to ship at the end of November, but there's no word on pricing yet.

Join HWZ's Telegram channel here and catch all the latest tech news!
Our articles may contain affiliate links. If you buy through these links, we may earn a small commission.
Previous Story
Tests show big jumps in image quality from iPhone 12 Pro Max's larger sensor if you shoot in RAW
Next Story
The Wolverine V2 is Razer's first controller for the Xbox Series X and S