M1 enters the telco fight with their ‘data upsize’ plans

M1 enters the telco fight with their ‘data upsize’ plans

Not one to idly sit around, M1 has voluntarily entered the fight against Singtel by offering new options to their SIM-only plans, along with their own interpretation of bonus mobile data add-ons to regular mobile plans.

M1 adds the mySIM+ 15 and mySIM+ 20 plans to their spread of SIM-only plans, which grants more SIM-only plan tiers at cut-throat prices. For example, M1’s mySIM+ 20 plan is valued at S$20 per month, but it comes with an attractive 3GB data bundle, together with 150 minutes of calls and 800SMS/MMS. If you opt to go with this plan on a 12-month contract, the mySIM+ 125 can allocate up to 20GB mobile data for your package. Refer to the table below to see the new breakdown.

In response to Singtel’s brand new DataX2 add-on option, M1 has also decided to beat them at their game. Dubbed as Upsized Data, this S$5.90 add-on will increase your mobile data allotment, but the increment is subjectively linked to the plan you’ve signed up for.

For example, you’ll get additional 2GB data on top of the original 3GB allotment when you go for the S$42 Lite+ smartphone plan. With M1 Upsized Data add-on, it will bring your Lite+ plan bill up to S$47.90 with 5GB mobile data allotment in total. Like Singtel’s move, the M1 Upsized Data add-on is only valid for new and re-contracting customers. Refer to the table below to see how it affects each existing plan. 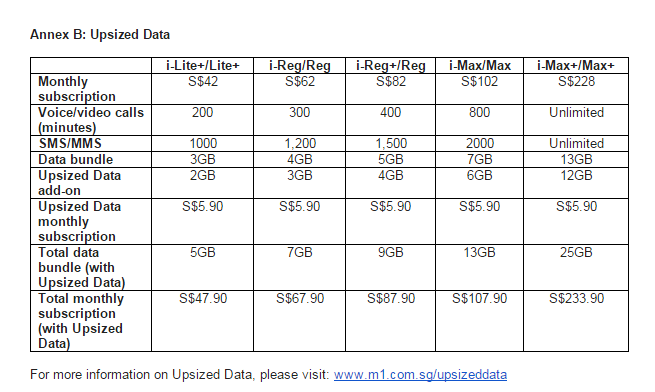 The move by M1 and Singtel is also a response to MyRepublic’s open registration of interest for mobile plans, offering a 2GB data plan at just S$8 every month (with excess data going at S$8 per GB), and an unlimited data plan at S$80 per month.