Intel has announced upcoming Skylake-based NUC with Thunderbolt 3 support. In the meantime, the company has released a new line-up that consists of four NUCs; two of them will be powered by Intel Core i3 CPUs, and the other two will feature Intel Core i5 processors. The Skylake processors are U-series ones, which are commonly found in Ultrabooks and portable AIOs. The most high-end of the lot is the NUC6i4SYH and it’s powered by the Intel Core i5-6260U processor. The CPU has a base clock speed of 1.9Hz, and a Turbo clock speed of 2.8GHz. Its specifications are quite similar to its previous generation counterpart, the NUC5i5RYH; however, the new Skylake-based NUC kit’s Core i5 CPU, the i5-6260U has a larger L3 cache of 4MB.

The Skylake CPU has upgraded integrated graphics capabilities as it features Intel Iris Graphics 540. Besides the upgrade in hardware, the Skylake Intel NUC has also shrunk by almost 17mm to a height of 32mm. The previous generation Broadwell NUC was taller at 48.7mm in height. Their lengths and widths remain the same at 115mm and 111mm respectively. As usual, there isn’t any word on their prices and availability. For now, you can look at their hardware specifications from the Intel site. 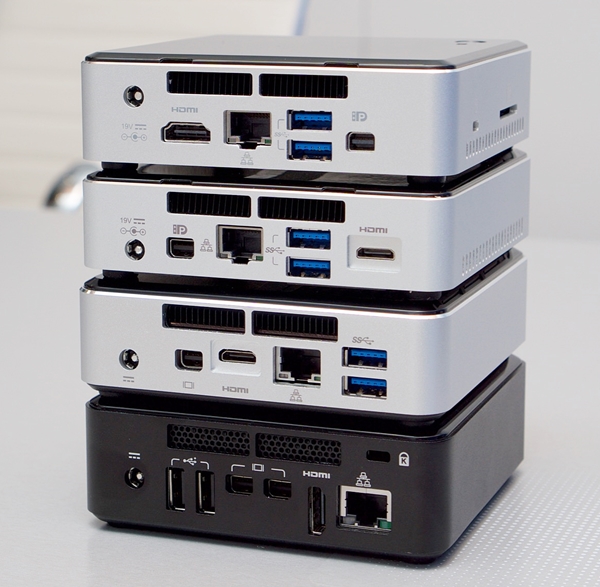 According to Ars Technica, it’s the upcoming Intel NUC kits with Thunderbolt 3 support that caught their attention. The new kits will feature re-designed casings, and we are sure that it’s more than a reduction in their height. The new NUC kit is codenamed “Skull Canyon” and will be powered by a quad-core Skylake Intel CPU with a TDP of 45W. This means the CPU will be from the Skylake H-series. In other to ramp up its iGPU performance, the processor will sport Iris Pro integrated graphics cores with up to 128MB of eDRAM.

With support for Thunderbolt 3, which is made available over a USB Type-C port, the new NUC kit is able to scale up its graphics compute requirements by using external graphics, i.e., a third party external graphics card enclosure. This isn’t known if Intel will depend on third party vendors or go about this on its own. The chip manufacturer intends to target PC gamers who need the space-saving features of the NUC kit. Hopefully, the flexibility offered by the upcoming NUC kit will appeal to them. Like all NUC kits, the Skull Canyon will also be a barebone one, and the owner needs to source for his own flash storage device, system memory and operating system. Intel told Ars Technica more details on the new Skylake NUC kits with Thunderbolt 3 support will only be made known at or near this year’s Game Developers Conference.

Join HWZ's Telegram channel here and catch all the latest tech news!
Our articles may contain affiliate links. If you buy through these links, we may earn a small commission.
Previous Story
Apple sold more iOS devices than all Windows devices combined in 2015
Next Story
Cleer Audio brings a world first in their latest Du Wireless headphones