Logitech has introduced the Logitech Mobile Speakerphone P710e, a compact speakerphone that's designed for an individual or small group to set up an instant conference room virtually anywhere, connecting on their PC, Mac, tablet, or smartphone. 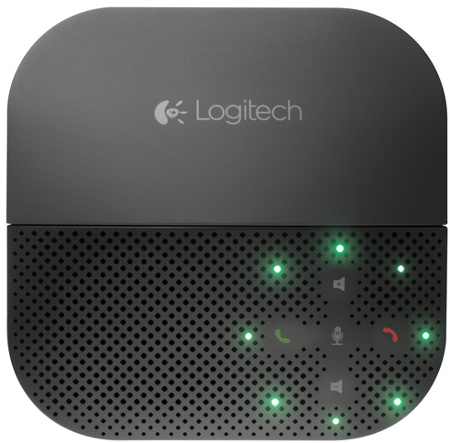 Offering up to 15 hours of battery life, the speakerphone's sliding top section reveals an integrated stand that holds a mobile phone or tablet at the optimal angle for hands-free video calls. Or, during audio-only calls, the user can place a tablet in the integrated stand, pair the tablet with a compact Bluetooth keyboard, and take notes during the call.

It features wideband audio and advanced DSP (Digital Signal Processing) technology that enables precise tuning for both the omni-directional mic and speaker so conversations are more lifelike. On top of USB and Bluetooth connectivity, it enables NFC pairing, allowing for up to eight Bluetooth devices, and connects to two Bluetooth mobile devices at the same time. Additionally, its USB plug-and-play connectivity makes it simple to connect to PC and Mac computers.

Ensuring an integrated experience with most business-grade UC platforms, the Logitech Mobile Speakerphone P710e is optimized for Microsoft Lync, Cisco compatible, and Skype certified. It can also be used with consumer applications such as Facetime, or for a regular phone call.

The Logitech Mobile Speakerphone P710e will be available globally in November 2013 for US$169.99. It will come bundled with a carrying case.