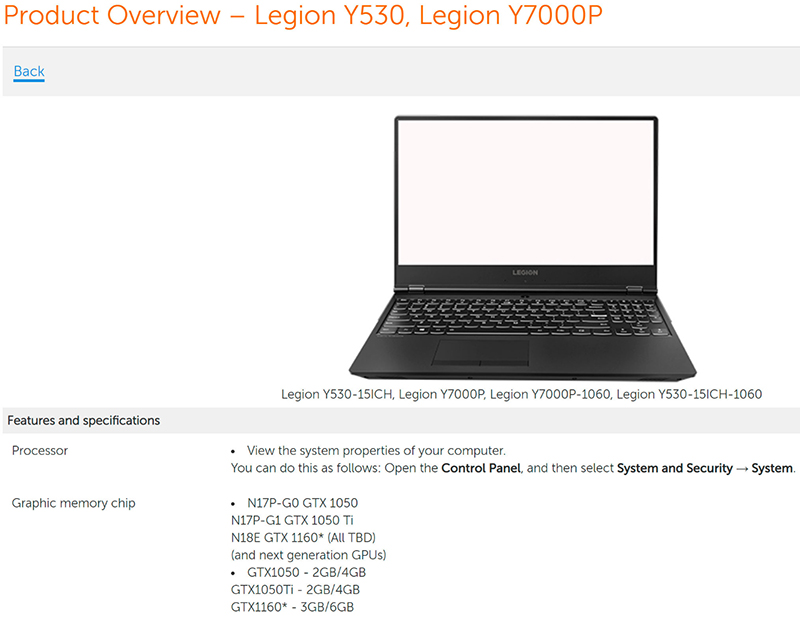 NVIDIA could be offering a GeForce GTX 11-series graphics card after all. According to a Lenovo listing on its support page for the Legion Y530 and Y7000P, there will be a new GeForce GTX 1160 graphics card which will be offered in either 3GB or 6GB variants.

That’s not unlike what the GeForce GTX 1060 currently offers, so it’s not that surprising that its successor would do the same. At the time of writing however, the listing has been modified to remove any reference to the GeForce GTX 1160.

Previous leaks have suggested that the 11-series cards will still utilize NVIDIA’s Turing architecture, but will not feature the RT cores that provide ray tracing acceleration capabilities. This would mean a much more affordable line-up of cards that could be much more palatable to mainstream users.

Lenovo’s listing also referenced unnamed “next generation GPUs”, so we could potentially see the 11-series further fleshed out later in 2019 or even a GeForce RTX 2050, which leaked just last week.

Join HWZ's Telegram channel here and catch all the latest tech news!
Our articles may contain affiliate links. If you buy through these links, we may earn a small commission.
Previous Story
Purported promo video of Nokia 9 PureView phone leaked
Next Story
Samsung’s 2019 smart TVs will allow you to access your PC from the big screen