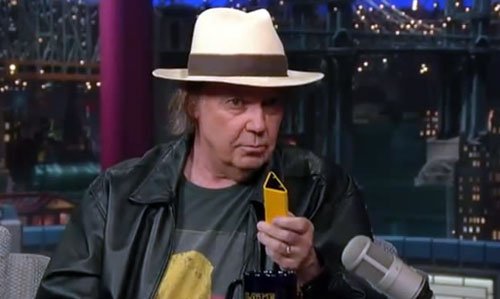 Apart from his rock and roll tunes, Neil Young is also known to be a cantankerous audiophile, one who frowns upon the inferior sound quality of MP3 audio formats. To remedy the situation, Young is planning to launch his own "Pono" audio system next year. The project will comprise of high-end portable music players and a download service retailing albums with supposedly better quality than those on Apple's iTunes. However, Gilad Tiefenbrun, Managing Director with Linn Products, has dismissed Young's solo project as "misguided" in one of his latest blog entries.

"Frustratingly, I told Neil Young exactly this last year, and it appears he didn't take on a word I said. There are already music players that play high resolution digital files. In FLAC we have a perfectly good file format that is free, open and lossless. And so Pono risks fragmenting the market, confusing many of those music lovers who would choose high quality, and delaying the standardisation and therefore the adoption of high resolution by the wider music industry", says Tiefenbrun.

He also added that "anyone looking at the toblerone-esque device knows intuitively that it is most definitely not going to offer the best sound anybody can get". Once famed for their CD players, Linn Products has been focusing on digital streaming products ever since the company ditched their CD portfolio back in 2010. Given their similarities with Young's upcoming offerings, it's only natural that the Scottish company has its own interests to protect. Young has been relatively quiet about the Pono project after he unveiled a prototype device on The Letterman Show in late September. As stated in his new book, Waging Heavy Peace, the rocker reaffirms his belief that the project will "save the sound of music". Originally called Puretone, Young has renamed his project as "Pono", meaning "righteous" in Hawaiian.

In an article published earlier this month, The Guardian has likened 256kbps MP3 files as an easyJet flight, compared to a trip on the Concorde with Pono's 24-bit files.

Source: Linn Products via What Hi-Fi Sound & Vision and The Guardian

Join HWZ's Telegram channel here and catch all the latest tech news!
Our articles may contain affiliate links. If you buy through these links, we may earn a small commission.
Previous Story
Roccat Unleashes 3D Supremacy Surface Gaming Pad, Hiro
Next Story
Rumor: Intel's Next-Gen Atom CPUs to Feature Up to Eight Cores