It seems like B Project - the Q1 2021 follow-up to LG's Explorer Project - is coming along sooner than we thought. Netherlands-based tech publication LetsGoDigital managed to dig up old patents granted to LG, where it showcased how LG's experimental phone with a rollable display would work.

'Rollable' is barely the best word to describe the several mechanisms needed to pull off the purported B Project smartphone. Based on the patent, the OLED display sits on a retractable frame that slides out from the left and right edges of the device. Pulling the additional display out will offer double the display size. The user can extend each side independently, so there's no need to open the panel on both ends fully to use the gadget. 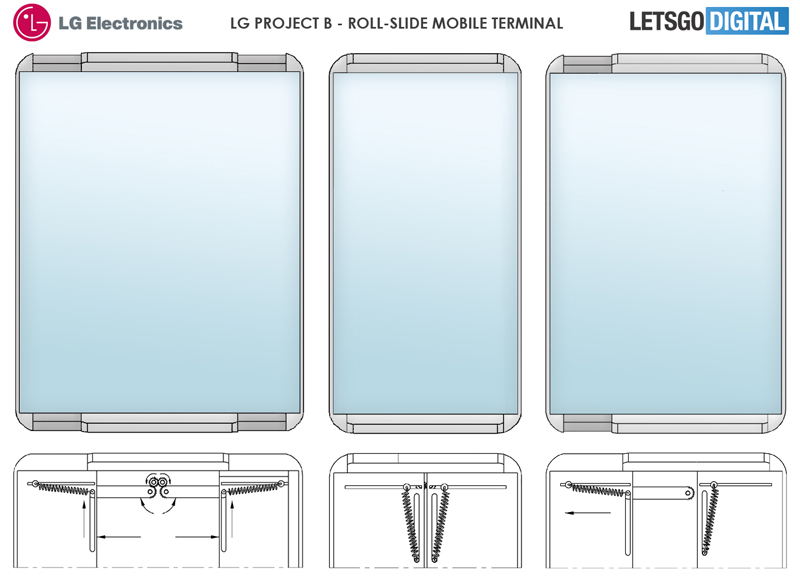 According to LetsGoDigital, the display shown on the patent is highly flexible and is rolled into the phone's housing. With both sides retracted, the device has a typical smartphone form factor. A fully extended B Project phone would have a panel aspect ratio similar to the Samsung Galaxy Z Fold2. Since the panels are rolled out instead of folded, the phone still retains a thickness similar to a regular smartphone.

To attain a retractable display within a reasonably smartphone-sized body, LG used a combination of saw gears, an elastic element, and a locking mechanism to prevent accidental unfurling.

More information, along with other concept art and renders, can be found on LetsGoDigital's website.