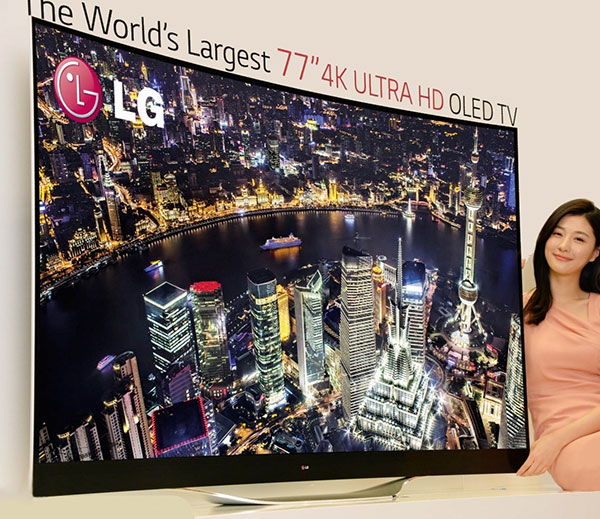 In a press release, LG has announced the various TVs it’ll be showcasing at CES 2014. Besides the 105-inch, 21:9 curved UHDTV we knew of earlier (model: 105UC9), we’ve seen most of these TVs at last September’s IFA trade show, though this time with official model numbers and more information on their other features.

For example, the 77-inch curved OLED UHDTV (model: 77EC9800) is making a return with its 65 and 55-inch siblings. Other features besides the WRGB-based 4K OLED panel include 3D support (naturally based on FPR 3D tech); a LG Color Refiner that controls the color temperature; an HDR algorithm that enables the TV’s infinite contrast ratio; Tru-Ultra HD Engine Pro that does the upscaling of non-4K content; Motion Estimation Motion Compensation that (well, as the name implies) makes action scenes look smoother; support for both H.264 and HEVC H.265 formats (either 30p or 60p); and a built-in decoder that accepts 4K content from external devices (e.g. USB drive). There’s also talk about it having LG’s newest Smart TV platform, but it remains to be seen if it’ll be based on WebOS (our guess is not for this TV).

Other TVs that will be on show are the painting-masquerading Gallery OLED TV (EA8800) and a second-gen, environmental-friendly, 55-inch curved OLED TV (note: 1080p).

LG ends the press release by touting its ‘large-scale global OLED TV production network’. To handle the expected growth in demand for OLED TVs, the company has new plants in Mexico, Brazil, Poland, China, and Thailand.

Join HWZ's Telegram channel here and catch all the latest tech news!
Our articles may contain affiliate links. If you buy through these links, we may earn a small commission.
Previous Story
Polaroid Has a US$1,000 4K TV
Next Story
Roccat Set to Showcase a Slew of Gaming Peripherals at CES 2014