LG yesterday announced a new smartphone lineup, the V series and the first of this series is the V10. The V10 smartphones comes with several noteworthy features such as a Second Screen, Dual Front Cameras, Manual Video Mode, a Dura Guard frame and a soft Dura Skin.

Starting with the Second Screen, it is located right above the primary display (5.7-inch Quad-HD IPS display). The 2.1-inch Second Screen has a resolution of 1040 x 160 pixels, and can be set to be "always on" to show the weather, time, data and battery icon. When the main display is being used, the Second Screen can be used as a space for app shortcuts. In addition, notifications such as an incoming call or text message will not interfere with whatever you are doing on the main display.

Like the manual mode for still in the G4 flagship smartphone, LG now introduces a similar mode for video recording. With Manual Video Mode, you can toggle options such as shutter speed, frame rate, ISO, white balance and focus while recording. The V10 is able to support video recording in HD, FHD, UHD in 16:9 and 21:9 aspect ratios.

The V10 is designed to be used in rough terrains; LG states that the phone comes with a resilient Dura Guard frame which secures the display and protects the device from hard bumps and tumbles. Apparently, the Dura Guard Frame is made up of SAE grade 316L stainless steel which is used to make surgical tools and luxury watches.

The front and back of the display is also protected by a resilient yet soft Dura Skin. It is said to be especially resistant to nicks and scratches, and is designed specifically with a back grid pattern for a more secure grip. With thee Dura Guard Frame and Dura Skin, LG claims the V10 is “MIL-STD-810G Transit Drop Compliant” for shock. To get this rating, the V10 has been dropped from a height of 48-inches repeatedly at different angles.

Other specs of the V10 include a Qualcomm Snapdragon 808 processor, 4GB RAM, 64GB internal storage space with microSD support up to 2TB, a 16-megapixel rear camera with f/1.8 aperture and optical image stabilization 2.0, a removable 3,000mAh battery, Android 5.1.1 Lollipop, a fingerprint sensor and a 8.6mm thin design that weighs 192g.

The V10 will be available in Korea this month followed by other markets such as the U.S, China, Asia, Latin America and the Middle East. 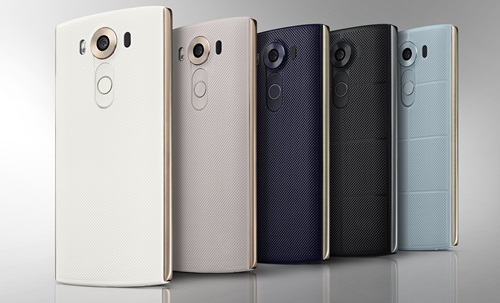