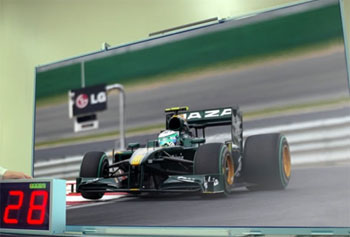 Generally, LED-backlit televisions are considered to be more energy-efficient than their CCFL counterparts. Recently, LG has found a way to make LED-based tellies even more so with a few engineering tricks. Unveiled over the weekend, LG claimed that the 47-inch LED-backlit unit has "the world’s lowest power consumption rate among large LCD panels". In addition, the Korean LCD panel manufacturer also maintained that the new panel consumes less power than computer monitors larger than 20 inches.

So how did they do it? LG's solution is quite simple really - one, by reducing the number of LED bulbs, and two, the incorporation of a three-film structure to maximize the light source. The LEDs are deployed on only side of the panel with local dimming faculties, as compared to conventional ones with LEDs mounted on both or all sides of the television's framework. The three-film structure is used primarily to focus and diffuse the light. According to LG, you only need 28 watts to power the 47-inch TV, whereas most 20-inch PC monitors demand 30 watts or more.

More impressively, the LED-backlit LCD is able to produce 400 nits of luminance despite its conservative energy requirements. On our part, we are wondering just how the panel's screen uniformity would fare when placed under the knife. Other traits of LG's latest brainchild include a Full-HD panel and slim profile.

Join HWZ's Telegram channel here and catch all the latest tech news!
Our articles may contain affiliate links. If you buy through these links, we may earn a small commission.
Previous Story
Windows Phone Addresses iPhone and Android's Flaws
Next Story
Apple iPhone 4S Reportedly Comes with 512MB RAM (Again)