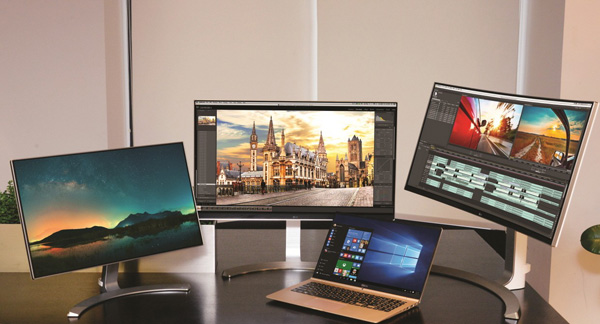 For nearly everybody, December is a month of relaxation. The Christmas holidays are coming and the New Year is nearly upon us. It's a time to reflect and look back at the past year.

If you're a tech lover though, December is a month of anticipation. While the Christmas and New Year's day holidays are great, it's just a lead up to January and CES, where all the latest innovations and products set to arrive in 2016 will be unveiled.

One of the first to show off what they'll have in store for CES 2016 is Korean tech giant, LG. The company's released a statement today stating that they'll be bringing a host of new premium monitors to the tech show. Here's a look at the handful they just revealed.

Finally, there's the LG 27UD88, a 27-inch 4K (3840 x 2160 pixels) flat monitor that comes with a USB Type-C port. It's meant for design work and offers color presets like Rec. 709 and SMPTE-C broadcasting standards, allowing users to easily adjust the image to match their preference.

LG also let slip that they'll also be debuting some new design elements in their 2016 lineup, such as the virtually invisible bezel on select Infinity Display models.

With CES 2016 just a few weeks away, expect to hear more announcements from other participating companies soon.

Join HWZ's Telegram channel here and catch all the latest tech news!
Our articles may contain affiliate links. If you buy through these links, we may earn a small commission.
Previous Story
Apple to develop 3D Touch technology for use on iPads, will not debut in 2016
Next Story
M1 offers unlimited in-flight data roaming at S$25