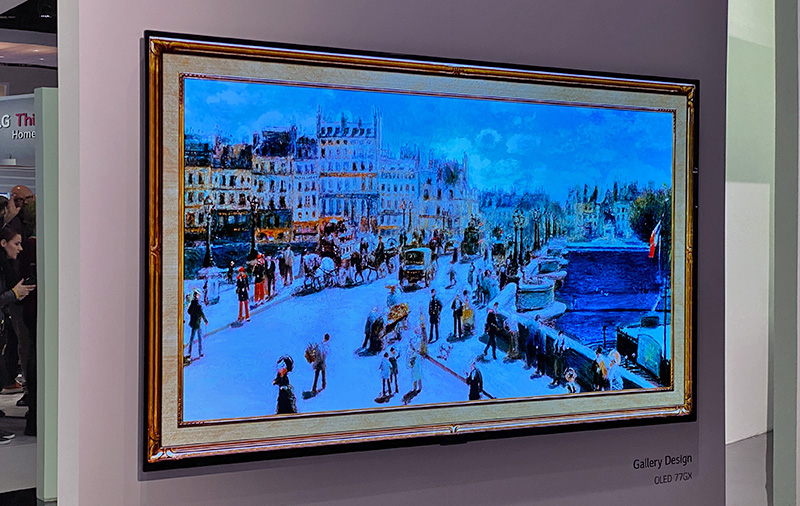 As we reported during CES in January, the newest addition to LG’s already many series of 4K OLED TVs is the Gallery GX. But where does it sit in the whole lineup relative to old-timers like the B, C and W series (called BX, CX and WX in 2020)?

In short, the new GX series is the WX series without the external soundbar. For the uninitiated, the W series is LG’s flagship wall-mount-only OLED TV and it was first introduced in 2017 in the form of the W7. Affectively known as the ‘wallpaper TV’, the W series’ claim to fame is that it sticks out no more than 4mm from the wall because LG has moved most of the electronics out to an external unit that also doubles as an Atmos soundbar.

While lauded for its design, there are people who don’t like the W series for practical reasons. For instance, because the soundbar is a must for the TV to work and houses all the inputs, enthusiasts who wish to use their own sound system can’t totally get rid of it and often have to find creative ways to hide it.

And here’s where the Gallery GX series comes in. The new GX OLED TV is still wall-mount-only, but there’s no separate soundbar this time as LG has managed to shove the I/Os back to the TV’s rear. The downside of course is a slight increase in thickness — which really isn’t much since this is OLED after all. My understanding is that with a special wall mount, the protrusion is still only 20mm.

Under the hood, the GX sports LG’s latest Alpha A9 Gen 3 processor, which is also found in the WX and CX series. As with every new processor, LG says its latest chip can do everything — 4K upscaling and sound processing especially — better thanks to AI, which is important because the panel tech itself is unlikely to have progress much, if at all.

The GX and WX also have a built-in ATSC 3.0 tuner. Also known as Next Gen TV, ATSC 3.0 is the newest standard for OTA (over-the-air) TV, and it’s designed to support up to 4K broadcast, 120fps high frame rate, HDR, wide colour gamut and 7.1.4-channel Dolby AC-4 audio. For the most part, this is relevant more for the U.S. market; since we use DVB standards for both terrestrial and cable, I expect models sold here to still come with a DVB-T2 tuner. 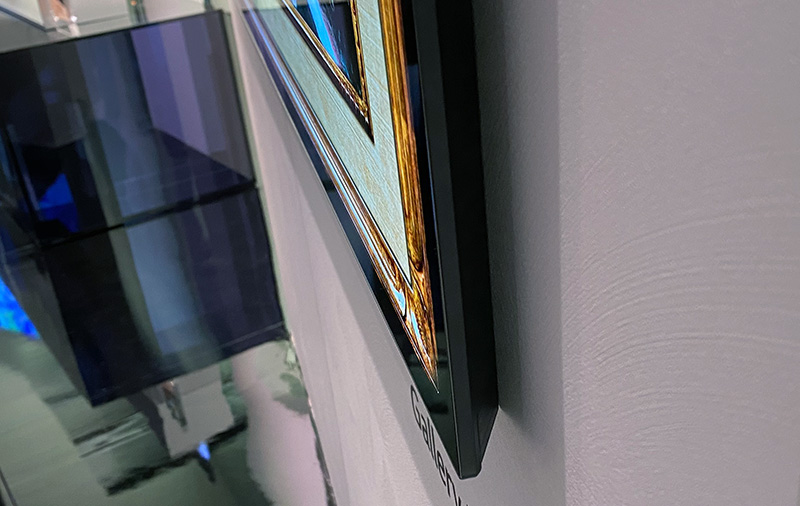 Another tentpole feature on the GX and WX series is a built-in, always-on-capable microphone for far-field voice control for LG’s own ThinQ AI (the wake word is ‘Hi LG’). The bundled Magic Remote also has a mic and continues to work with other assistants such as Google Assistant and Amazon Alexa.

The aforementioned model-specific features aside, LG is continuing its good habit of sharing as many features as possible across its lineup: HDMI 2.1, Dolby Vision, Dolby Atmos, Filmmaker Mode — they all come as standard for the entire lineup.

Software-wise, the new TVs still run WebOS, which now gains an improved home dashboard for better device tracking. There’s also a new ‘Who? Where? What?’ capability that can provide real-time info about the playing content, including the location of the scene and what the actors are wearing.

Last September, LG began rolling out NVIDIA G-Sync support for its 2019 OLED TVs. The 2020 TVs now support G-Sync out of the box, but what’s new is that LG is also promising FreeSync support via a software update that’s coming at a later date. Until that happens, only Samsung TVs support FreeSync.

At the moment, there’s no word on when LG’s newest 4K OLED TVs would go on sale here. Based on track record, I expect LG Singapore to carry all the new series with the exception of the entry level BX series, primarily because LG didn’t bring in last year’s B9 series. For what it’s worth, the smallest LG OLED you can get this year is the 48-inch model in the CX series. (I don’t think it’s a coincidence that Sony also has a 48-inch A9S OLED TV this year.) Both the WX and GX series are available in 65- and 77-inch screen sizes, but you can also get the GX is a slightly smaller 55-inch size.

Join HWZ's Telegram channel here and catch all the latest tech news!
Our articles may contain affiliate links. If you buy through these links, we may earn a small commission.
Previous Story
Call of Duty: Warzone is a free-to-play battle royale game
Next Story
Apple says it's OK to use isopropyl alcohol wipes to disinfect your Apple products