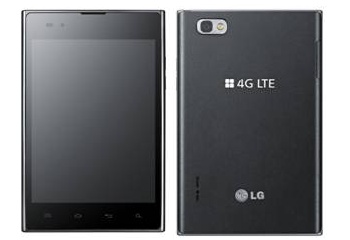 Powered by a 1.5GHz dual-core processor, the Optimus Vu offers a combination of tablet-like viewing with smartphone portability. Equipped with LG's advanced LTE and IPS display technology, it features a 5-inch display with bright 4:3 aspect ratio and has built-in QuickClip hotkey which allows users to conveniently capture screenshots and memos in a single push. On top of this, the pre-loaded Polaris Office allows users to open any document, spreadsheet, or presentation while on the go.

Measuring at 8.5mm thin, the Optimus Vu includes a 32GB internal memory and an 8-megapixel camera. It will initially run on the Android 2.3 Gingerbread platform, but users will get an Android 4.0 Ice Cream Sandwich upgrade.

The Optimus Vu will be introduced in Korea in March, with a Q4 2012 availability date slated for Singapore. While SingTel is the only service provider with a commercial LTE plan as of now, it was mentioned that LTE devices, ranging from smartphones to tablets, will be available in 2012. The Q4 availability of the LTE-capable Optimus Vu somewhat confirms that news, though it's unclear if the Optimus Vu will support the spectrum used in Singapore.

Additional information on the unique Optimus Vu: can be found at the LG Stand (Hall 8) at MWC 2012 from February 27 to March 1. Do check back regularly, as we will be reporting live from Barcelona, with some early hands-on impressions of the various smartphones announced during the event.

SINGAPORE – LG today unveiled one of the most anticipated LTE devices, the Optimus Vu:. Equipped with LG’s advanced LTE and IPS display technology, the Optimus Vu: offers a unique combination of tablet-like viewing with smartphone portability. Running on a powerful 1.5GHz dual-core processor, 32GM internal memory and a large 2,080 mAh battery, the Optimus Vu: is a multimedia lover’s dream device.

The large 5-inch display with bright 4:3 aspect ratio makes viewing documents, books, internet and multimedia contents easier and more comfortable. The 4:3 aspect ratio is optimized for viewing to grasp more at a glance and note taking to increase productivity in everyday life. Moreover, IPS display realizes every color in its natural state for the best viewing experience even under bright sunlight.

Backed by unparalleled speed and performance from LG’s advanced LTE technology, the Optimus Vu: boasts unmatched productivity. Its unique built-in QuickClip™ hotkey allows users to conveniently capture screenshots and memos with a single push. Jotting notes is also possible with a finger or with the dedicated Rubberdium™ pen. Among many productive apps installed in the Optimus Vu:, the included Polaris Office allows users to open any document, spreadsheet or presentation while on the go.

At only 8.5mm, the Optimus Vu: is the slimmest among all LTE phones currently on the market and is perfectly suited for a hand and fits comfortably in a jacket pocket. Despite the large 2,080mAh battery, the Optimus Vu: adopts LG’s exclusive floating mass technology to appear slimmer than its actual dimensions.

In addition to HDMI (High Definition Multimedia Interface) and DLNA (Digital Living Network Alliance), Optimus Vu: comes with 32GB memory and an 8-megapixel camera. While it will initially launch running Android 2.3 Gingerbread, an update to Android 4.0 Ice Cream Sandwich is already in the works.

The Optimus Vu: will be introduced in Korea in March. Additional information on the unique Optimus Vu: can be found at the LG Stand (Hall 8) at MWC 2012 from February 27 to March 1.