LG-made Google TVs Landing in The States on May 21st

LG-made Google TVs Landing in the States on May 21st 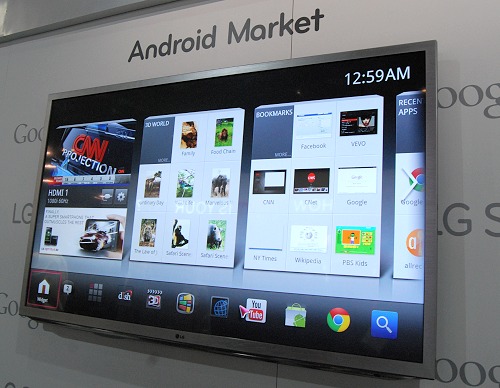 Logitech bailed out on Google last year when sales for the Google-powered Revue set-top box didn't quite rake in the big greens as anticipated. On the contrary, TV makers like LG has since stepped up to the plate to lend Google's Smart TV package (Google TV) some support, as we've highlighted during our CES coverage in January where we caught a glimpse of the proposed G6 and premium G8 series. LG cited a "late quarter" release back then, although it's turning out to be more of a second-quarter launch as things progress.

According to Reuters' report, production of LG's Google TV sets will commence in Mexico shortly, and they'll be made available to U.S. buyers in the week of May 21st. LG did not provide any shipment details on the televisions' sizes or prices. However, the company might consider pushing their Google TV offerings to Europe and Asia depending on sales figures in the U.S. market as echoed by Ro Seogho, Executive Vice President of LG's TV business unit. Another recent report from PCWorld suggests that the Google TV sets would feature larger screen sizes, ranging from 55 to 84 inches, 2D to 3D conversion, and of course, the incorporation of LG's passive 3D display technology (Cinema 3D). This will effectively be a two-pronged approach from the South Korean manufacturer, for they'll be retailing the Google TV offerings alongside their televisions equipped with their own NetCast online entertainment platform in America.

It's not surprising that Google has lofty ambitions in the HDTV arena, since it gives the search giant a chance to extend its online advertising business to the big screens. We reckon it's only natural for them to do so with the present proliferation of Smart TVs as well. Logitech has suffered millions in losses when they crafted Google's early set-top boxes, but one can only hope that the latest slew of Google TV offerings wouldn't encounter the same demise. Other notable makers expected to churn out the new Google TV products include Vizio and Samsung.

Join HWZ's Telegram channel here and catch all the latest tech news!
Our articles may contain affiliate links. If you buy through these links, we may earn a small commission.
Previous Story
Olympus Releases High-End Tough Camera TG-1
Next Story
Taking Touch Surfaces to the next Level with Disney Research's Touche