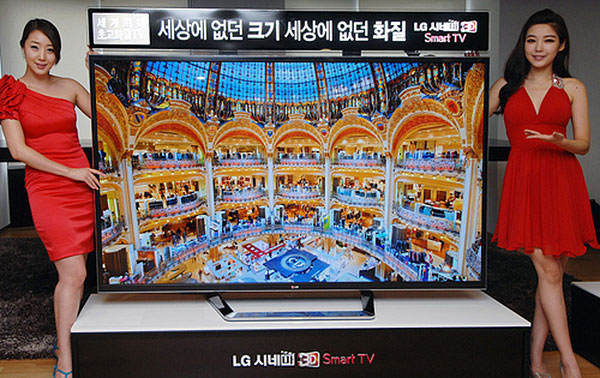 LG Electronics has officially launched the world’s first 84-inch Ultra Definition (UD) 3D TV in the Korean market. This new TV is given the label of Ultra Definition, thanks to its ability to display a resolution of 3,840 x 2,160 pixels, which is also known as Quad Full High Definition (QFHD), or 4K.

To make full use of the increase in resolution, the LG 84LM9600 is equipped with Resolution Upscaler Plus to allow for the upscaling of images from external sources, such as hard disk drives. Apart from that, LG has also integrated its Cinema 3D technology to allow the TV to support 3D content.

Cinema 3D not only supports 3D content, but allows for 3D depth control, which enables viewers to fine-tune the 3D effects for a comfortable viewing experience. To view 2D content in 3D, a built-in 2D-to-3D conversion engine is onboard the TV, complete with Dual Play technology that makes it possible for the TV to display two separate images at the same time. The latter allows gamers to share a single screen.

The LG UD 3D TV also comes with the latest LG Magic Remote, allowing for intuitive access to all of the TV’s features, especially the Home Dashboard. The Home Dashboard is where LG’s Smart TV ecosystem is located; there are now approximately 1,400 apps available for users to experience.