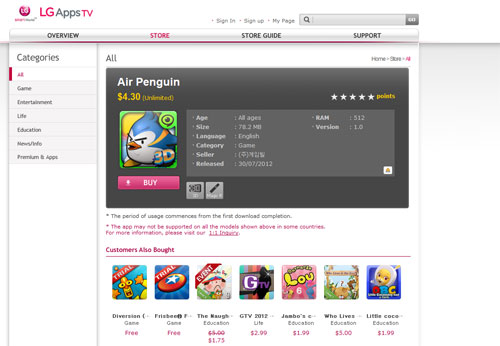 The Smart TV titans are stepping it up in the gaming arena. Samsung launched Rovio's Angry Birds recently, a game which makes use of Samsung's gesture-control feature available on their high-end Smart TV models. LG Electronics, on the other hand, responded by releasing five 3D gaming titles for its Cinema 3D TVs. These offerings were previously available in 2D on mobile platforms, such as Android and iOS, but this is the first time they're making their way to the television domain.

According to HDTVtest's report, these are not run-of-the mill titles developed by LG, but "some of the most popular mobile games" available in the market. Air Penguin is apparently one of the most downloaded games in the States last year. Other 3D titles include Burn The City, Frisbee Forever, Diversion, and Downhill Bowling 2. It is also reported that LG's Magic remote with its point-and-click capabilities will feature heavily in the gameplay. Some games, such as Frisbee Forever, are free, whilst others such as Air Penguin costs $4.30 to download.

The five 3D applications are available via LG's online Smart World portal. There's a disclaimer on LG's Apps TV page stating that some of these apps may not be supported by some TV models in specific countries. Not to worry though, for we've confirmed with LG Singapore that the aforementioned 3D games are already accessible and compatible with their local Cinema 3D TV range.

Join HWZ's Telegram channel here and catch all the latest tech news!
Our articles may contain affiliate links. If you buy through these links, we may earn a small commission.
Previous Story
Dropbox Suffers Security Breach
Next Story
New BlackBerry 10 Dev Phone Leaked