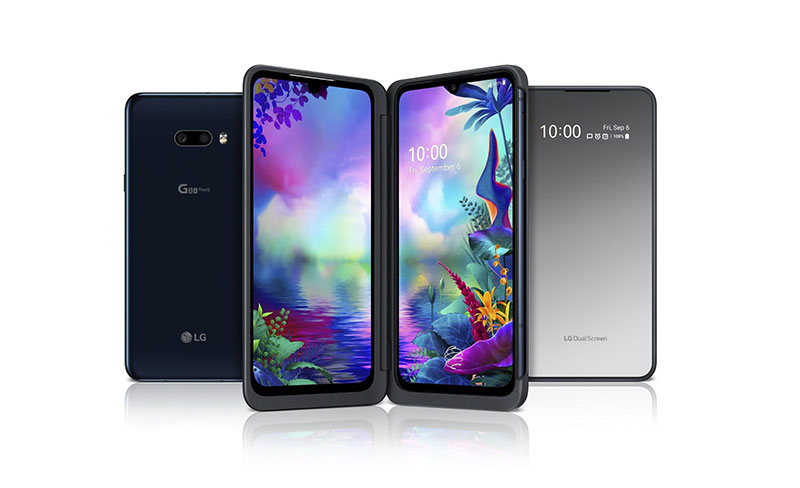 LG's dual-screen G8X ThinQ smartphone is set for a 1 November launch in the US. The device isn't like other dual-screen smartphones we've seen so far though. Instead of using a foldable screen like Samsung's Galaxy Fold and Huawei's Mate X, or having a hinged second screen, the G8X ThinQ's second display comes from the case it ships with.

The G8X ThinQ is otherwise a pretty regular-looking slate, but it has a case with a flip-out second screen. You can turn the secondary screen on and off and also remove the phone any time. The case is an updated take on the dual-screen snap-on case that released with the LG V50 earlier this year, and LG says it's been working on the idea since before foldable phones became all the rage in 2019.

The case now relies on a USB-C connection instead of pogo pins and it's the same size as the G8X ThinQ's 6.4-inch primary OLED display. Compared to the V50, which had a slightly smaller 6.2-inch screen on the case, the pair of screens on the G8X ThinQ should look more natural together. In fact, the second screen even has a "fake" notch to better match the primary display.

The hinge has also been upgraded to offer a full 360° of tilt freedom. There's even a smaller 2.1-inch screen on the outside that can show the time and your notifications. In addition, the entire thing is supposedly more power efficient than before.

The G8X ThinQ itself has most of the trappings of a Android flagship in 2019, including a Snapdragon 855 processor, 6GB of RAM, and a 4,000mAh battery. It tops out at 128GB of storage, but there is support for expandable microSD storage up to 1TB. LG also threw in an in-display fingerprint sensor and dual rear cameras. Finally, it still has a 3.5mm headphone jack, making it one of the few flagships to still have that.

The second screen can act as a game pad for games that support Android's controller API, so it could come in quite handy. That said, it'll need extensive third-party app support to really work well.

The G8X ThinQ is expected to retail at US$699, so it's among the most affordable dual-screen devices you can get this year.

Join HWZ's Telegram channel here and catch all the latest tech news!
Our articles may contain affiliate links. If you buy through these links, we may earn a small commission.
Previous Story
Huawei announces two new colours for the P30 Pro, which also comes with Android 10 (Updated)
Next Story
Bethesda is now selling premium features for Fallout 76 at US$100 per year