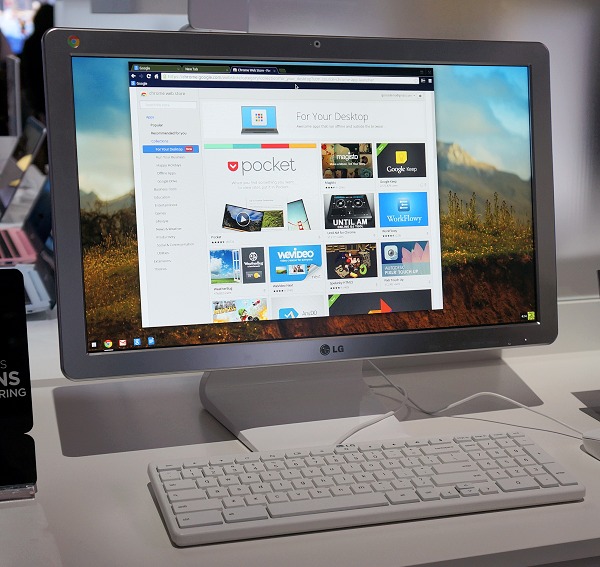 You would have been well acquainted with Chromebooks, netbook-like products running Chrome OS, but LG is the first to debut a Chromebase - an all-in-one PC running the Chrome OS.

Boasting a full HD 21.5-inch IPS panel (1920 x 1080 pixels), viewing angles are good. Of course, you can't expect a UHD screen as Chrome-based products are targeted for mass adoption. Still, we're glad that it's at least a respectable 1080p screen. Its powerhouse is courtesy of a basic Intel Haswell processor, so it's more than enough for its net-centric use. Input/output options include a HDMI output, microphone input, headphone output, a USB 3.0 port and three USB 2.0 ports.

Unlike most Chromebooks that have a rather basic plastic build that reminds of notebooks from many years ago, LG's Chromebase looks quite respectable with an all-white finish and a nice silver trim around its screen. Accompanying the Chromebase is Chrome-optimized keyboard/mouse combo with specific keys and buttons that give it more functionality for its OS.

On a comparison note, HP has the Slate 21, a 21.5-inch AIO PC that was launched half a year ago and runs on an Android 4.2 Jelly Bean OS.

For those still wondering how the Chrome OS differs from the Android OS, the primary differences are that the Chrome OS and its apps are designed for light productivity needs that take advantage of full keyboard/mouse inputs and that all work takes place within its Chrome browser where everything is automatically saved to the cloud (and as such, requires constant internet connection).

In contrast, the Android OS is made for content consumption, touch-input interface and has apps that run natively on its own OS without a net connection. This is the reason HP's Slate 21 is aimed at family entertainment, game play with friends, and doesn't have the traditional mouse/keyboard input for an AIO PC.

At this point of time, LG hasn't yet set a price point for the Chromebase, which is crucial to determine its uptake in the crowded maketspace of cheap AIO PCs running the full Windows OS. For LG to shine, it has to impress on first impressions and be priced to compete. It has the right feature set, now it depends how it will be marketed.

Join HWZ's Telegram channel here and catch all the latest tech news!
Our articles may contain affiliate links. If you buy through these links, we may earn a small commission.
Previous Story
Feeling Lonely? Chat with your LG Smart Appliances!
Next Story
StarHub Launches 4G Booster VAS for Prepaid Customers