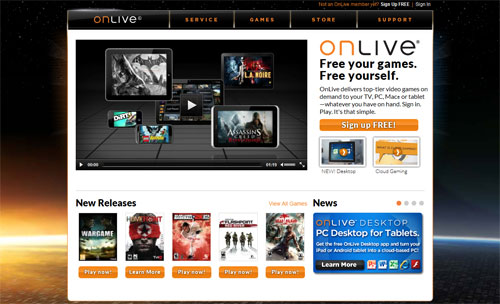 Televisions are evolving at a rapid rate. They've become 'smarter', and are now equipped to deliver 3D content as well. But before the entire slew of Ultra High-Definition and OLED sets should hit the market, it seems like the South Korean TV makers have planned for something in the bag for consumers. Both chaebols made similar announcement during the recent Electronic Entertainment Expo (E3), with LG showcasing their OnLive Game service on a series of G2 Google TVs, while Samsung flaunted their Gaikai-powered Samsung Cloud Gaming service on their Smart TVs.

Essentially, the OnLive Game portal specializes in delivering high-end video games to various platforms, including PCs, Macs, HDTVs, and even mobile devices such as smartphones and tablets. LG will be looking to capitalize on this cloud gaming feature on their 47G2 and 55G2 Google sets specifically, equipped with L9 dual-core processors alleged to be the ideal platform for gamers to relish OnLive's portfolio of mainstream video games without the need for gaming consoles or computers. LG's OnLive Game service is expected to go live in the near future. Users will be able to play demos, purchase individual games, or subscribe to OnLive's PlayPack packages with unlimited play-time on more than 220 titles. Social networking features have been thrown in for free too, such as OnLive's Brag Clip feature which enables gamers to share snippets of their gameplay with other players online.

Samsung, on the other hand, has chosen to go with Gaikai's cloud-based gaming services. Similar to LG's OnLive addition, the Gaikai service will enable Samsung's Smart TV owners to revel in advanced video games without relying on gaming consoles like the Sony PlayStation 3 or Microsoft Xbox 360. All that's needed is a broadband internet connection to link up the Smart TV to cloud gaming servers. According to HDTVtest's report, this feature will be released as a beta for Samsung Smart TV users in the States, and will be limited to premium 2012 models like the ES8000 and ES7000 series due to the service's extensive hardware requirements. The Gaikai open-cloud platform will be available directly via Samsung's Smart Hub platform.

Although both gaming services seem like a real treat for gaming aficionados, whether LG's Google TVs and Samsung's fleet of Smart TVs are able to render a smooth and lag-free gaming experience still remains to be seen. We'll bring you more updates once we find out if the OnLive and Gaikai supplements would be made available to users here in Singapore.

Join HWZ's Telegram channel here and catch all the latest tech news!
Our articles may contain affiliate links. If you buy through these links, we may earn a small commission.
Previous Story
No iOS 6 for Original iPad and Third-Gen iPod Touch?
Next Story
ASUS Xonar Phoebus Sound Card Set Projects 'Cone of Clarity'