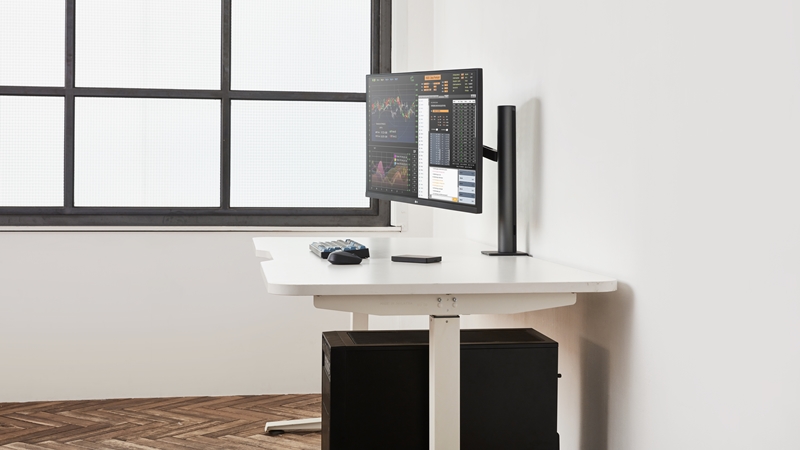 It's 8 am on yet another weekday, and you shuffle into your study with a steaming cup of coffee in hand. As a designer, you're quite used to spending long periods in front of the computer working on client commissions, but the strained eyes and stiff neck have certainly worn you down.

Fortunately, there are tools like ergonomic chairs, desks and input devices to uplift your productivity with more thought to the users. But what about the largest device on your desk, the screen? Bet you didn't expect that to factor in the ergonomics equation, but the spanking new LG Ergo Concept UltraFine 4K monitor has it all figured out.

The latest addition to the company's list of ergonomic monitors comes in 27-inch and 32-inch variants and doubles down on what LG refers to as "position versatility". Among other things, they deliver a whole new level of customizability, doing away with the usual pains and strains brought about by using conventional monitors. Generally speaking, the LG Ergo Concept monitors are all about "movement" - they can adjust in a vast multitude of ways to accommodate different user preferences, and you can thank the similarly named Ergo Design for that. It consists of an ergonomic arm that pivots and tilts to ensure your monitor is always positioned comfortably - putting these monitors a leg (or rather, an arm) up over conventional options on the market.

For instance, the monitors feature a height adjustment range of between 0 to 130mm, and they can be extended or retracted across a depth of 180mm. Furthermore, the ergonomic arm can also swivel up to 280 degrees, pivot up to 90 degrees and tilt up to 25 degrees – allowing for a near-unparalleled range of movement to find your sweet spot.

Of course, having such a wide adjustment range means sturdy support is needed to hold the monitor in place. Accordingly, the LG Ergo Design package comes with a C-Clamp and One Click Mount, which not only keeps the stand and monitor secure, but also makes setup a blissfully simple affair. Don't worry about messy cables either, as built-in cable management fixtures ensure nothing gets in the way of the task at hand. Both monitors also feature a USB-C One Cable solution that provides up to 60W of power for charging and data transfer to your notebook via a single cable.

Efficient? Yes. Tidy? Definitely so. Not having to connect and rely on multiple bulky cables goes a long way towards keeping your workplace neat and conducive, so you can get started on new projects (or the latest drama seasons) as soon as they come your way.

It's especially great for tag-team efforts It doesn't matter how skilled you are - even the most talented and hardworking designers can use a hand from time to time, and collaborative work is where the swivel function of the LG Ergo Concept monitor really shines. After all, the position versatility of these monitors doesn't just mean having more user customisation options - it also pays dividends in collaborative projects.

How so? Well, rather than having to get your colleagues at the opposite desk to walk over to you to glance over your work, all you have to do now is swivel the LG Ergo Concept monitors around. This not only saves time that would otherwise be wasted shuffling between work desks but also facilitates an improved collaborative experience.

Additionally, working in front of a screen for long periods can really do a number on your vision and productivity. That's especially relevant now, considering so many people work remotely from home and find it challenging to separate work from play (and rest). So, being able to freely turn the monitor away when you need to rest your eyes will undoubtedly help to alleviate some of the optical strains at a moment's notice.

All that versatility and then some However, the LG Ergo Concept monitors aren't just about versatility. After all, what good is an ergonomic-friendly monitor if its display performance isn't up to scratch?

Well, these monitors give your work lifelike realism with their crystal-clear IPS displays, and that's just the tip of the iceberg. For example, both monitors come equipped with a sharp 3,840 x 2,160 pixels (4K) resolution display and support HDR10, which offers deeper colour and contrast for more true-to-life image quality.

Additionally, the 27-inch variant also features VESA DisplayHDR400 certification, which promises detailed, true-colour clarity at wide angles while offering 99% sRGB coverage. The 32-inch's display, on the other hand, covers 95% of the DCI-P3 colour gamut. Furthermore, both monitors also feature AMD's FreeSync support, so you will never have to worry about ugly screen tears and stuttering when playing your favourite PC games with compatible graphics cards. Beyond servicing professionals like designers and content creators, LG's duo of monitors, with their spread of position versatility, image quality and visual clarity, also make them excellent general-purpose picks for just about anyone. Users will certainly be pampered for impressive visuals with one of these at home or office, and the presence of the ergonomic arm makes it as easy to set up for work as it would be for binging a favourite TV series on any video streaming service of choice.

Above all, these sleek displays feature everything one could need and expect from a top-shelf monitor option and are a solid choice for both professional and leisure owners.

The LG Ergo Concept UltraFine 4K monitors are available on the official LG Lazada and Shopee stores as well as authorised retailers including Best Denki, Courts and Harvey Norman from S$899.

Our articles may contain affiliate links. If you buy through these links, we may earn a small commission.
Previous Story
Explore the world of Tales of Arise in a free demo coming next week
Next Story
Get your hands on Diablo 2: Resurrected during this month's open beta