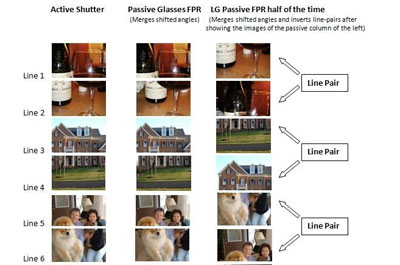 Earlier this year, Rodolfo La Maestra from HDTV Magazine published an article which took a closer look at LG's passive 3D TV technology, otherwise known as FPR or Film Patterned Retarder. Although no concrete technical details were furnished by LG then, La Maestra did attempt to make better sense of the Koreans' 3D technology, which uses interweaving odd and even lines to create a final 3D image on their latest range of Cinema 3D TVs.

More recently, he published another article which placed greater emphasis on LG's purported use of inverted video lines. Essentially, La Maestra asserts that LG's passive 3D TVs not only interweaves left and right eye images in a single frame, but they also invert line-pairs on their second video cycle. This claim isn't new, since he did touch on LG's quirky technique in a previous feature back in August. With his most recent piece, however, LG's deployment of inverted line-pairs during the second 120Hz cycle is more evident (and bizarre perhaps?) since they are illustrated next to their active-shutter adversaries.

On our end, we did highlight the presence of raster-like lines or dividing lines when we reviewed the LG LW6500. But similar to what La Maestra suggests towards the end of his article, this may be a small price to pay when you consider the downsides of possible crosstalk or visual comfort which active-shutter types might portend.

Join HWZ's Telegram channel here and catch all the latest tech news!
Our articles may contain affiliate links. If you buy through these links, we may earn a small commission.
Previous Story
SANUS Ships the VMA302 iPad 2 Mount Adapter
Next Story
X79 Motherboard Offerings from ASRock!