Lenovo’s premium Yoga line of laptops and convertibles have gotten some major updates here at IFA 2019, with four new series—Yoga C940, S740, C740 and C640—and a total of seven new models. If that’s a little confusing, let me break it down for you. 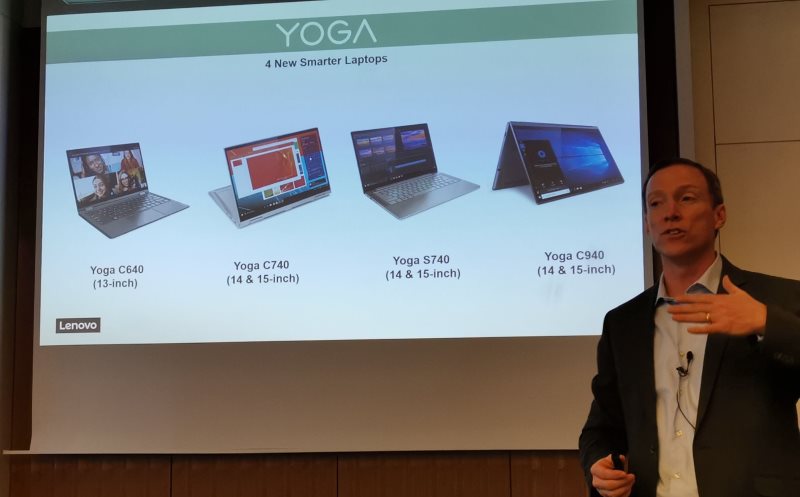 The C940, S740 and C740 all come in 14-, and 15-inch sizes, while the C640 comes in a 13-inch model only. The reason I’m taking the time to make this distinction is because some of the new features Lenovo is introducing may not be available on different sizes of the same series and it took me a while to digest which model had which feature. In the end, I figured that the easiest way is to talk about the new highlight features first, then a quick preview of each of the seven models individually, so strap in for a wild ride.

Super Resolution is a Lenovo-proprietary technology born out of the Project Athena program with Intel and works only with Athena-specced laptops running 10th-Gen Icelake processors. Super Resolution is basically a video upscaler that can upscale lower resolution videos up to a maximum of 1080p. It is currently limited to content played on Windows Media Player though. However, Lenovo did mention that models sold in China can work outside WMP, which leads us to believe that it should be easy enough for them to enable it for the rest of the world too. 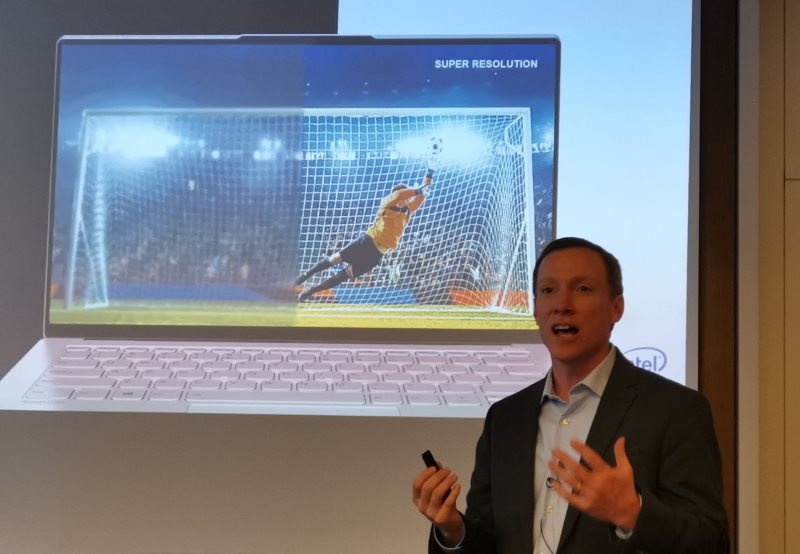 Now, I’m not entirely convinced that Super Resolution is the killer app I’ve always wanted on my laptop. I won’t pass judgement on the quality of Super Resolution’s upscaling since I didn’t really get to see it in action, but 1080p video feels rather standard for a 2019 feature - let alone the content produced and consumed in general. What more on laptops that have 4K UHD displays?

Q Control is more promising. At a glance, it’s a quick key to toggle between the usual laptop performance modes for maximum battery saving to maximum performance. What’s interesting is the in-between. Instead of the usual Balanced mode you get under Windows, Yoga laptops with Q Control will feature an AI-enhanced Intelligent Cooling Mode. It’s supposedly much better at analysing your usage patterns to dynamically adjust for cooling/performance. Lenovo is claiming to be able to squeeze 15-20% more battery life using this mode on top of the improvements that Icelake already brings.

If this too sounds somewhat familiar, Gigabyte's Aero 15Y notebook was among the first to incorporate Microsoft's Azure AI to intelligently distribute and manage power between the CPU and GPU to supposedly reduce heat and noise by optimizing things like fan speeds needed to manage a particular real-time workload. It hasn't really panned out notably in our testing period, even on the latest Aorus 15 XA, but we're keen to find out if Lenovo's Q Control can make a better impact.

With the new Yoga range, comes tighter Alexa integration, which is now always on and sits above the lock screen. This means that you don’t have to first unlock Windows and start the Alexa app, though you will need to have the lid open to activate the mics. You will be able to instantly talk to Alexa and get responses even when the laptop is locked, with multi-language speech input without the need to change system language settings. At the start, only English and German are supported, with more languages (Japanese, Spanish, and French were mentioned) coming soon. Lenovo is also outfitting these Yoga laptops with far-field mic arrays, so Alexa will be able to hear you up to 4m away. Not only that, there are interface tweaks so that the visual experience of talking to Alexa on these Yoga laptops will feel similar to other smart home devices. 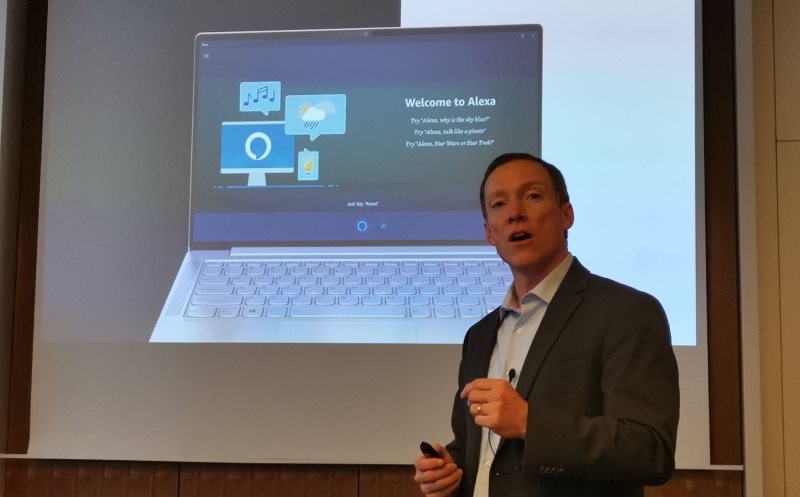 The C940 (14-inch) will be the first of two Project Athena laptops coming out of Lenovo’s stable. As such, it will support all the new features mentioned before: Super Resolution, Q Control and lock-screen Alexa integration. This is Lenovo’s flagship all-metal convertible that supports up to 10th Gen Intel Core i7 processors. As such, battery life is enhanced up to 17.5 hours with a Full HD display, or 10.5 hours with a 4K UHD display. It has a Dolby Atmos speaker system built into the rotating hinge, which has an updated design so the hinge is now one single bar instead of two like the older Yoga C930. The Yoga C940 model will also feature Wi-Fi 6 support and option for Intel Optane H10 storage.

Other features brought forward from previous-gen models include TrueBlock built-in webcam shutter, Windows Hello authentication support, plus built-in pen and pen garage. The C940 (14-inch) goes on sale in September 2019 with a starting price of €1,499. 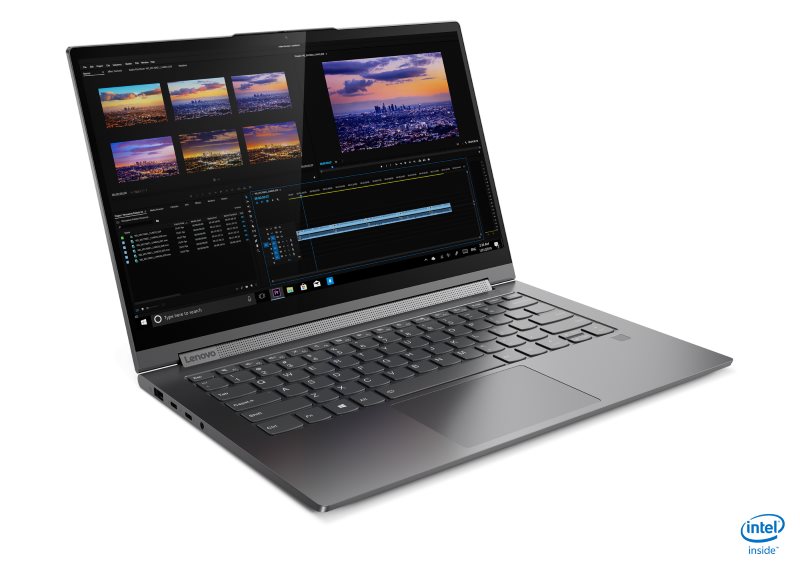 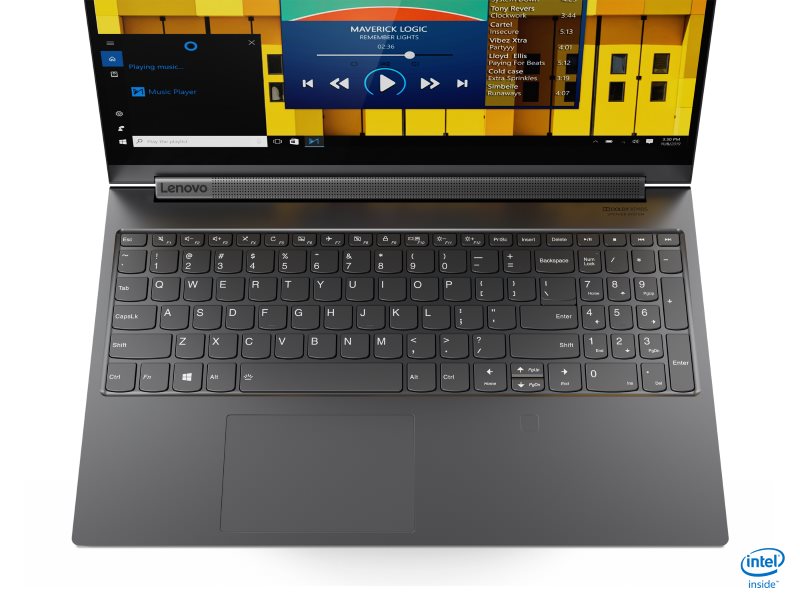 The other Project Athena laptop to come out of IFA 2019 from Lenovo. As with the C940 (14-inch) above, the S740 (14-inch) will have Super Resolution, Q Control and lock-screen Alexa integration. The S740 (14-inch) is a standard clamshell laptop though, and comes with an advanced IR camera and Time-of-Flight sensor array. This allows for more intelligent security. In addition to Windows Hello login, the S740 (14-inch) can also detect if you’re away from your laptop and can be configured to auto lock it after a few seconds, or even auto pause/resume videos so you don’t miss a thing. What’s more, with the IR and ToF sensor, there is now an option to apply a blur effect to live video calls. So you can now mask your surroundings and take important conference calls without worry about being video-bombed. 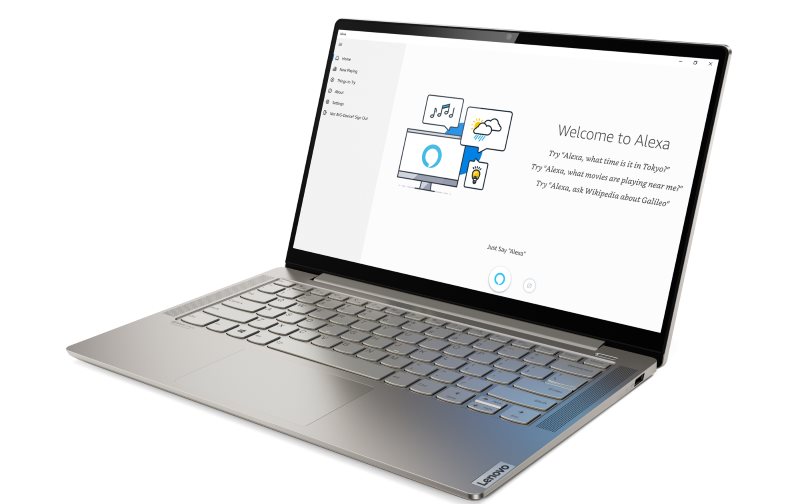 The 15-inch version looks exactly the same as the 14-inch S740, but it's not based on Project Athena and thus, does not have an Intel 10th Gen Icelake processor, Super Resolution or Q Control features. It also doesn't have the IR and ToF camera features on the 14-inch version, and from what we understand, it also doesn't have the far-field mic array like the other notebooks, though it does work with Alexa.

In essence, the S740 (15-inch) is the muggle of the group. The S740 (15-inch) is however, configurable with 9th Gen Intel Core processors up to Core i9 and NVIDIA GeForce GTX 1650 discreet graphics. What’s interesting is both the standard FHD and UHD display options on the S750 (15-inch) are VESA400 HDR IPS displays with Dolby Vision and 500nits brightness. The 4K display is also a touchscreen too, though the standard FHD display isn’t. The S740 (15-inch) also has a more powerful Dolby Atmos with a Smart Amp speaker setup. So again, the 15-inch version of the S740 is basically a more powerful Ultrabook without fancy bells and whistles, while the 14-inch version is the “smarter” model. The Yoga S740 (15-inch) goes on sale in September 2019, starting at €1,399. 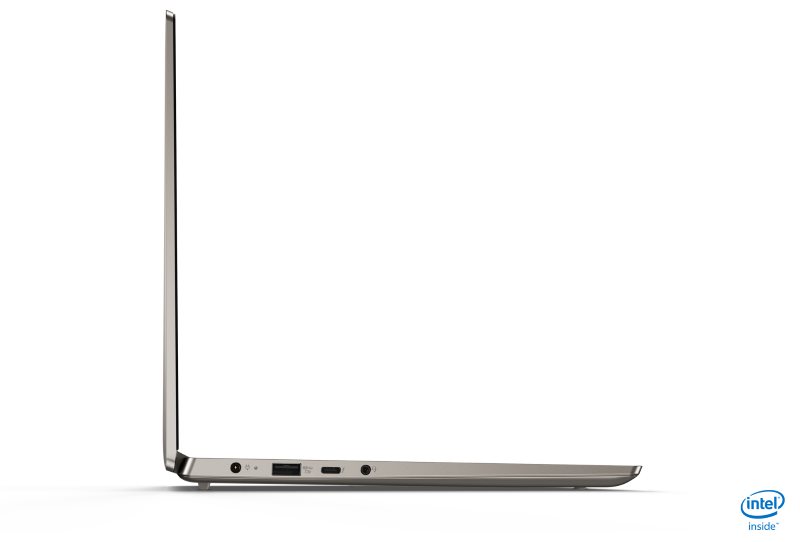 If the Yoga C940 is the flagship convertible, the C740 are the mainstream models. But pay attention now. Both the 14-inch and 15-inch Yoga C740 laptops will come with 10th Gen Intel Core processors up till Core i7. However, they are not Project Athena laptops. Therefore, the Yoga C740 range does not feature Super Resolution and Q Control functionality. They do support lock-screen Alexa integration though and Wi-Fi 6 options. Both 14-inch and 15-inch versions are pretty similar this time around except for the following configuration options. The 14-inch C740 has Optane H10 support, while the 15-inch doesn’t. Both laptops will only have a FHD screen, but the 15-inch C740 can be upgraded to a better display with VESA400 HDR, Dolby Vision and 500 nits brightness. The C740 series also has Dolby Atmos speakers, but does not have the rotating hinge bar design like the C940 series. Both Yoga C740 laptops go on sale in September 2019 with a starting price of €899. 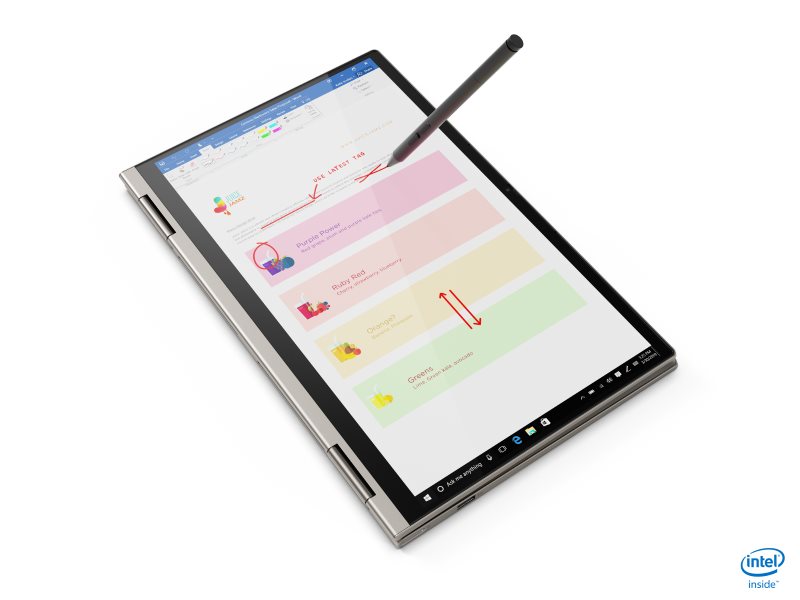 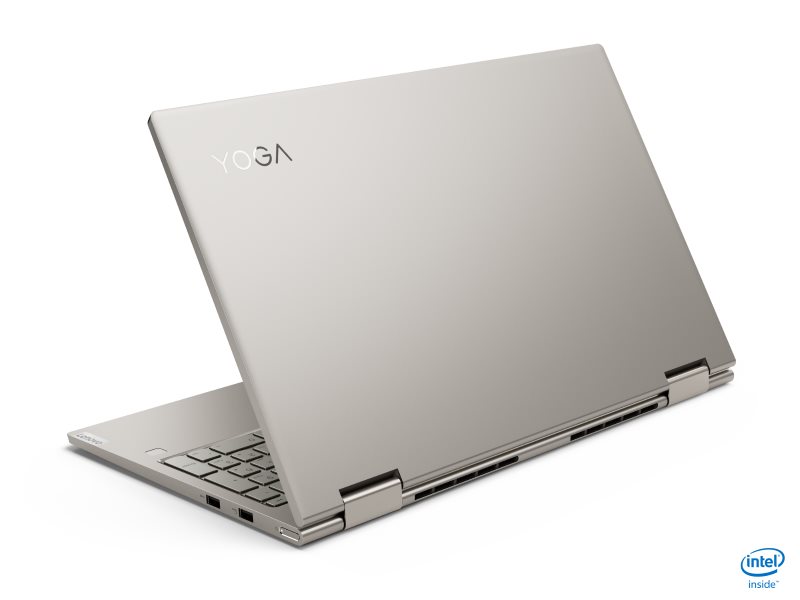 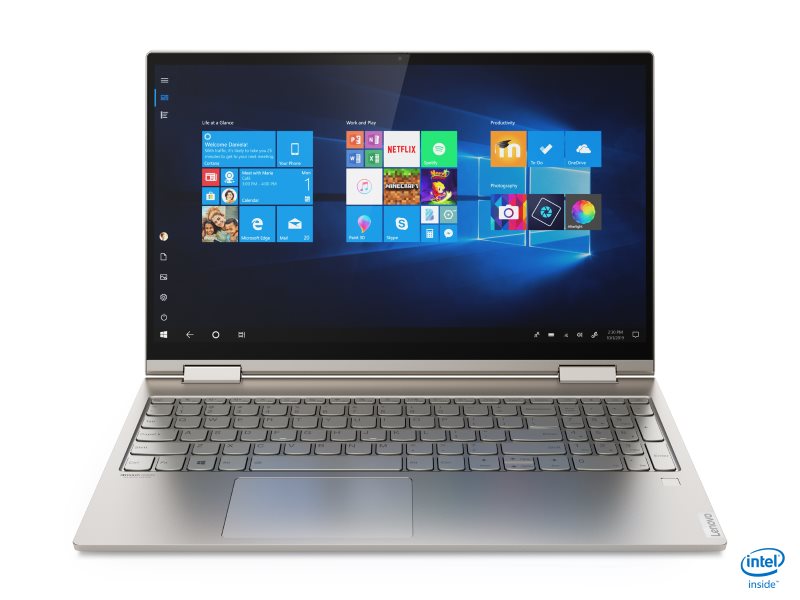 The last one to get updated is the Yoga C640 (13-inch). This convertible will also receive 10th Gen Intel Core CPUs with configuration options up till Core i7. However, it is also not a Project Athena laptop, so you won’t see the smart features such as Super Resolution here. From what we understand, the C640 (13-inch) is the only Yoga in the release list that also doesn’t feature the new lock-screen Alexa integration and will only work with Cortana out of the box. The C640 (13-inch) is the only Yoga in the list to offer LTE and Wi-Fi variants (with optional Wi-Fi 6 support). Spec-wise, it’s designed as an ultra-lightweight mobile workhorse that’s only 16.1mm thin, under 1.3kg in weight and boasts up to 20 hours of battery life. The Yoga C640 (13-inch) goes on sale in October 2019 with a starting price of €899. 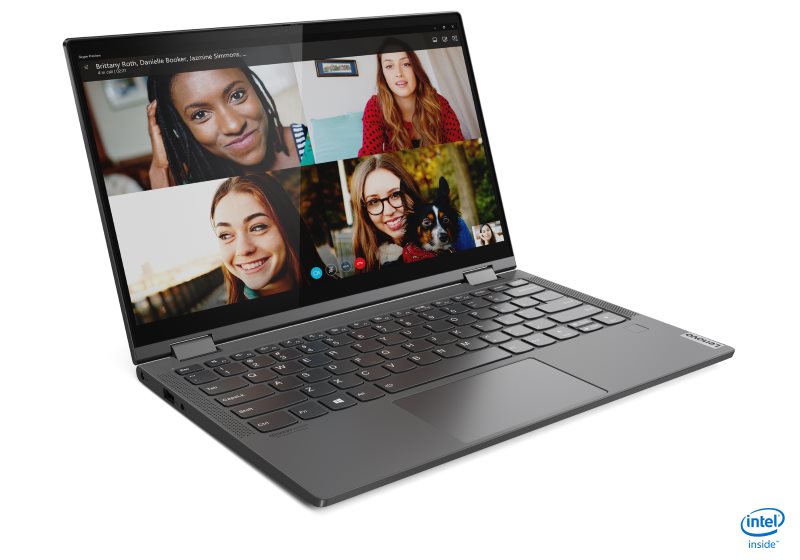 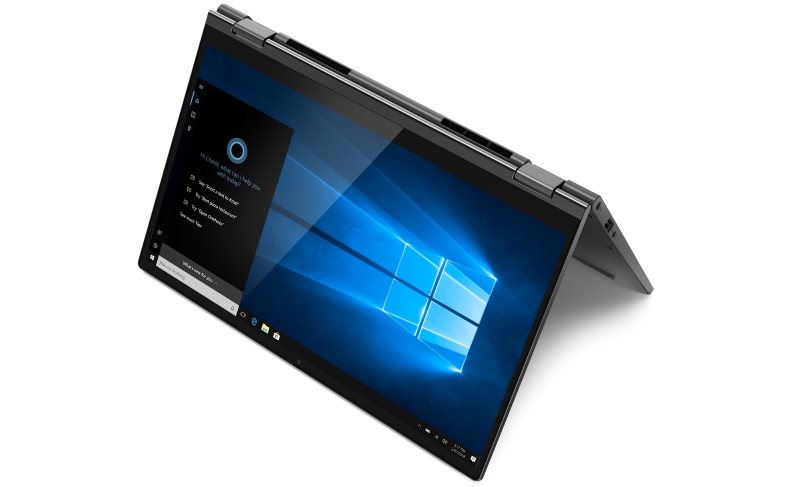 Join HWZ's Telegram channel here and catch all the latest tech news!
Our articles may contain affiliate links. If you buy through these links, we may earn a small commission.
Previous Story
Lenovo wants to turn its tablets into smart displays for your smart home integration
Next Story
LEGO's newest Imperial Star Destroyer is its longest Star Wars set ever and is magnificent!