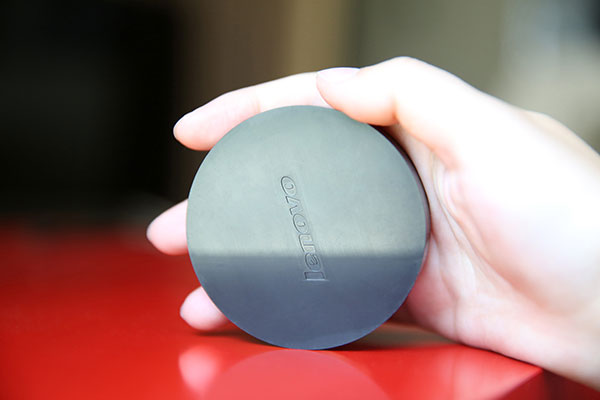 At Lenovo Tech World yesterday, Lenovo launched the Lenovo Cast, the company’s first media casting devices that allows users to cast content from their mobile devices to the big screen. As mobile devices become growing repositories of photos, videos and apps, users increasingly want new and better ways with which to share and consume content. Devices like Google’s Chromecast already allow users to cast content to their TV, and it is this latter device that the Lenovo Cast will go head to head against.

To start matters off, the Lenovo Cast is a dongle-like device that plugs into any HDMI port like the Chromecast. Measuring just 70mm in diameter and 15mm in height, the circular device should fit neatly enough behind or beside any TV. It’s also extremely portable, so users will be able to take the ability to cast to large displays wherever they go.

After plugging it in, users will need to link the dongle to the signal from the display they want to stream on. The Lenovo Cast is designed to cast media from devices running Android 4.3 and above, but it will also support selected Miracast- and DLNA-enabled Windows 8.1 and iOS devices. Furthermore, the Lenovo Cast features dual 2.4GHz and 5GHz Wi-Fi antennas, which Lenovo says helps boost performance and ensure uninterrupted streaming of 1080p content.

Lenovo’s media streaming device will be available worldwide this August and will cost US$49, which is only slightly pricier than the Google Chromecast that cost US$35 at launch. However, many modern smart TVs already support content casting without the need for any external dongles, so we’re guessing that the Lenovo Cast will find a larger audience among owners of older TV sets.

Join HWZ's Telegram channel here and catch all the latest tech news!
Our articles may contain affiliate links. If you buy through these links, we may earn a small commission.
Previous Story
Starhub to offer Intel Compute Stick with select broadband and HomeHub subscriptions
Next Story
HTC: One M9 and M9+ to be updated to Android M, more devices to be announced soon